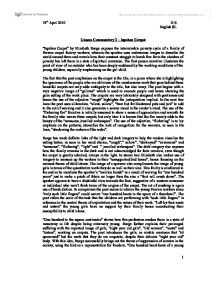 “Ispahan Carpet” by Elizabeth Burge exposes the interminable poverty cycle of a family of Persian carpet factory workers, wherein the speaker uses cadaverous images to describe the world around them and reveals how their constant struggle to break free from the clutches of poverty has left them in a state of spiritual comatose. The first person narrative illustrates the point of view of an outsider who has been deeply saddened by the working conditions of the young children, especially emphasising on the girl child.

The fact that the poet emphasises on the carpet in the title, in a poem where she is highlighting the ignorance of the people who are oblivious of the cumbersome work that goes behind these beautiful carpets not only adds ambiguity to the title, but also irony. The poet begins with a very negative image of “gallows” which is used to execute people and hence showing the grim setting of the work place. The carpets are very intricately designed with gentleness and hence the use of the adjective “rough” highlights the juxtaposition implied. In the next few lines the poet uses alliteration, “silent, sallow”, “bare but for blackened pots and jars” to add to the act of weaving and it also generates a serene mood in the reader’s mind. The use of the “flickering fire” fricative is initially assumed to show a sense of appreciation and warmth for the family who weave these carpets, but only later it is known that the fire merely adds to the beauty of the “sensuous jewelled arabesques”. The use of the adjective, “flickering” is to lay emphasis on the patterns, intensifies the lack of recognition for the weavers, as seen in the lines, “shadowing the makers of the webs”.

Burge has made definite links of the light and dark imagery to help the readers visualise the setting better, as seen in her word choice; “rough”,” sallow”, “dark-eyed” “cavernous” and “sensuous”, “flickering”, “light” and  “ jewelled arabesques”. The dark imagery also exposes how the family remains in the dark and is not acknowledged for their creation, even though the carpet is greatly admired, always in the light. In stanza two Elizabeth also makes use of imagery to measure up the workers to their “unsupported bird bones”, hence focusing on the eminent theme of child labour. The image of a sparrow also compliments the image of young girls in terms of the quantitative work they do as well as their size. This frailty is reinforced in the end as he mentions the speaker’s “swollen hands” as a result of weaving for “one hundred years” just to make a patch of fabric no larger than the size a “foot will crush down”. The speaker appears to have a disdainful view towards the foot, suggestive of a western consumer or individual who won’t think twice of the origins of the carpet. The act of crushing is again use of harsh diction. In comparison the poet seems to admire the young Persian workers since “only such little fingers” could weave “one hundred knots in the space of a thumbnail”. The poet refers the scale of the task that the children are performing with “such little fingers” in reference to the central theme of exploitation and the nature of their work. “Left by their aunts and sisters” the young girls have no support by their family hence accentuating their susceptibility to child labour.

“One hundred to the square centimetre” shows how this profession renders them in a state of monotony in life despite being extremely young. Burge further explains their prolonged suffering with the repeated image of girls, “eight year old girls”, “old women”, “aunts” and “sisters”, working on carpets. The poet introduces the girls, as nimble creatures that “sit sparrowed” but the work that they do are exquisite, despite their delicate “eight year old” body. With this idea, Burge successfully brings out the theme of suppression of women in the society, using the bird as a representation for freedom. “One hundred heart-beats of a young child’s growing”, also talks about the privileges, singing and flying like birds, that were taken away from these young girls. The mention of only female characters for such a cumbersome job highlights the societal pressures in order of hierarchy as well as the stereotypical views in terms of work. This view is supported by the line, “One hundred to the square centimetre, says the guide proudly”, as it uses the guide to represent the males, who are often given a high placement in the society. The use of feminine semantic field suggests the conventional stance on the world of a woman and also highlights the absence of men in this field of work. This also supports the lack of appreciation for their “traditional beauty”. The lines. “Who can unravel the worlds weaving?” highlights the future of these weavers and their lack of hope and restricted opportunities. The question is almost rhetorical as if the answer is apparent “with a speaking darkness.”

The variety of punctuations, like an exclamation and question mark, commas and full stops adds volume to the poem and at the same time highlights the tumult for the poet. This stanza makes the poem rather interactive and hence open to varied interpretations. The readers are given an insight of the speaker, by using pronouns like “my”, “me” and “she”. The comparison of a swollen hand being “gentle on the greenstick shoulder” suggests the fragility. The image of the ‘large eyes’ of the little girl primarily serves to symbolize a greater expectation from life, “whose horizon is the carpet”. The innocence is highlighted here as she talks about the limited perspective of little girls and the opportunities that have been shrouded with images of the “sensuous jewelled arabesques”.

The structure and the use of anaphora also help in the first person narration of the poem, as it is reflective of the memories or accounts of this Persian family. The poem is slow paced and sets a gloomy mood. As the poem proceeds, the poet starts to reveal the colourless details in their lives to show the “darkness” in their near future. Themes like child labour and women suppression are also enforced throughout the poem, hence evoking sympathy in the reader’s mind. The repetition of “one hundred” in the third stanza has crisp, expressive sentences to bring out the brutalities of their work and questions the norms. The latter part of the poem is thought provoking and imparts a universal message while the poet subtly makes an attempt to try and bring about a change. The triad structure helps in evoking sympathy and pity for the Persian family. The last stanza puts across a final stand of the poet on the prevailing working conditions of the girls, which is accomplished with the use of short sentences.

The poet dramatically but effectively stirs the feeling of empathy by instilling a sense of guilt in the readers by conveying the story behind weaving one carpet. The poet intensifies this sense of injustice with the aid of vibrant visual imagery and rhetorical questions. Burge uses several literary techniques such as juxtaposition, repetition and structure to effectively portray the poverty of these factory workers, through their act of making the carpet.