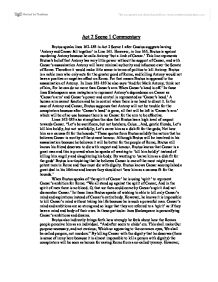 Act 2 Scene 1 Commentary Brutus speaks lines 162-183 in Act 2 Scene 1 after Cassius suggests having 'Antony and Caesar fall together' in Line 161. However, in line 165, Brutus is against murdering Antony because he calls Antony 'but a limb of Caesar.' This line represents Brutus's belief that Antony has very little power without the support of Caesar, and with Caesar's assassination Antony will have minimal authority and influence over the Senate of Rome. Therefore it would make little sense in terms of politics to kill Antony. Brutus is a noble man who only acts for the greater good of Rome, and killing Antony would not have a positive or negative effect on Rome. For that reason Brutus is opposed to the assassination of Antony. In lines 181-183 he also says 'And for Mark Antony, think not of him, For he can do no more than Caesar's arm When Caesar's head is off.' ...read more.

Although Brutus will be involved in his assassination because he believes it will be better for the people of Rome, Brutus still knows his friend deserves to die with respect and honour. Brutus knows that Caesar is a great man and this is proved when he speaks of wanting to 'kill him boldly' instead of killing him angrily and slaughtering his body. By wanting to 'carve him as a dish fit for the gods' Brutus is articulating that he believes Caesar is one of the most mighty and potent men in Rome and thus must die with dignity. Brutus knows Caesar accomplished a great deal in his lifetime and knows they should not 'hew him as a carcass fit for the hounds.' When Brutus speaks of 'the spirit of Caesar' he is using 'spirit' to represent Caesar's ambition for Rome. "We all stand up against the spirit of Caesar, And in the spirit of men there is no blood. ...read more.

However, if the conspirators were to kill Antony along with Caesar, they would be perceived as acting in self-interest instead of murdering for the greater good of Rome. Although the other conspirators are members of the Senate, none care as much about the perception of themselves in the citizens' eyes as Brutus does. This is proven simply because Brutus was the first to bring up what the effect the death might have on the Roman people (line 178). In its entirety, Brutus's twenty lines in Act 2 Scene 1 state his opposition to killing Antony because he assumes that Antony will have no power and say in the Senate without Caesar. He also solidifies his love for Caesar and Rome by wanting to have Caesar's body still have the stateliness it had before his death. Brutus also wants to be viewed with the great respect by the Roman people after the assassination as he thinks of the Roman people when planning the conspiracy. ...read more.