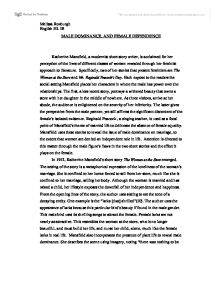 MALE DOMINANCE, AND FEMALE DEPENDENCE Katherine Mansfield, a modernist short story writer, is acclaimed for her perception of the lives of different classes of women revealed through her feminist approach to literature. Specifically, two of her stories that present feminism are The Woman at the Store and Mr. Reginald Peacock's Day. Each expose to the readers the social setting Mansfield places her characters in where the male has power over the relationships. The first, a less recent story, portrays a withered beauty that owns a store with her daughter in the middle of nowhere. As three visitors, arrive at her abode, the audience is enlightened on the severity of her inferiority. The latter gives the perspective from the male partner, yet still affirms the significant discontent of the female's isolated existence. Reginald Peacock , a singing teacher, is used as a focal point of Mansfield's theme of married life to delineate the absence of female equality. Mansfield uses these stories to reveal the issue of male dominance on marriage, to the extent that women are denied an independent role in life. Attention is directed to this matter through the male figure's flaws in the two short stories and the effect it plays on the female. ...read more.

Back 'e'd come...till 'e could twist me round 'is finger, then 'e'd say 'Well, so long, I'm off'" (16). This indicates that she is powerless and ultimately worthless. Mansfield enhances this point by denying the woman a name in the story. This devalues her character. Furthermore, even though the woman at the store was clearly not fit to raise a child, she was expected to bear and care for children as one of her duties. This responsibility establishes the lack of independence of women, because they are pressured to reproduce no matter what the situation. All this woman was really good for was her skill of " 125 different ways of kissing" (14). The phrase "knock up" emerges twice as well, pointing out her role in life as a sexual figure. Male dominance is expressed despite the actual appearance of the husband in the story. However, we see the effects his actions left in her life. Even the woman acknowledges this by stating that he had " broken [her] spirit and spoiled [her] looks" (16). The woman is ultimately a tool for reproduction, and a worthless addition to her husband's selfish lifestyle. Mr. Reginald Peacock's Day, written eight years after the first story, offers a more modern view of the idea of male superiority. ...read more.

The author uses this to demonstrate the male domination in the story. The different perspectives of the two stories allow the audience to see both the thoughts of the male, and the negative results male dominance produces in the lives of females who are denied independence in society. It also gives insight into the author's concern of female status. In The Woman at the Store, we see the woman's view, which allows the perspective to focus on how the inferior status of women actually affected women. Contrary to this point of view, in Mr. Reginald Peacock's Day, we see the male's point of view. This engages the author's audience in the conceit of a man suppressing the rights a female, and could possibly even cause a biased outlook on this particular protagonist. Mr. Peacock's fantasy world, and refusal to accept responsibility give readers a glimpse of the author's irritation of female limitations. The significance of addressing male dominance in her stories critiques the male superiority, and the few choices women have outside of their marriages. It leads the audience to admit the unfortunate realization that females are forced to depend on male figures more or less in these stories, and the inequitable authority given to husbands. Melissa Roxburgh English HL IB ...read more.