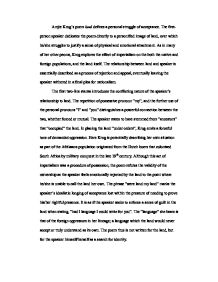 Antjie Krog's poem land defines a personal struggle of acceptance. The first-person speaker dedicates the poem directly to a personified image of land, over which he/she struggles to justify a sense of physical and emotional attachment. As in many of her other peoms, Krog explores the effect of imperialism on the both the native and foreign populations, and the land itself. The relationship between land and speaker is essentially described as a process of rejection and appeal, eventually leaving the speaker withered in a final plea for nationalism. The first two-line stanza introduces the conflicting nature of the speaker's relationship to land. The repetition of possessive pronoun "my", and the further use of the personal pronouns "I" and "you" distinguishes a powerful connection between the two, whether forced or mutual. The speaker states to have stemmed from "ancestors" that "occupied" the land. In placing the land "under orders", Krog emits a forceful tone of demanded oppression. Here Krog is potentially describing her own situation as part of the Afrikaans population originated from the Dutch boers that colonized South Africa by military conquest in the late 19th century. Although this act of imperialism was a procedure of possession, the poem refutes the validity of the ownership as the speaker feels emotionally rejected by the land to the point where he/she is unable to call the land her own. ...read more.

The nature imagery expressed in the "rustling blue gums" refers to the species of European gumtrees introduced into Africa by colonizers. The "blue" color imagery symbolizes liberalism on a political level, and is associated with the speaker's desired peace and hope. The "cattle lowering horns into Diepvlei" are a metaphor for the land's native population yielding to the Afrikaans oppressors. Their "jowls drink in silky tassles", as if drawing stength from the land when "quivering" with fear. The water imagery implied by the "silky tassels" introduces water's ability to alter shape and form as a symbol of purification and rebirth. However, the loose, threadlike state of the water implied in the diction of "tassels" lacks a sense of unity. History offers only a fragmented freedom, as imperialism has forever tainted the land's people with a lack of trust in each other. This theme of disturbance in the natural flow of life is continued in the diction of the words "rustling", "rippling", "quivering", and "dripping", which all carry undertones of uncertainty of form and structure. The accompanied plosive sounds warn the potential effect of the historical shift in state of the land. The final line describes how the "thorn trees...have slid into emptiness". ...read more.

The speaker is asking the land to hide and seek protection internally, finding defintion beyond the technicalities associated with physical ownership in the same way the speaker as ignored his/her European heritage. The land "never belonged" to the speaker, but he/she belongs to the land. The last stanza offers an answer to the speaker's developing relationship with the land. It is a final plea, a final declaration of his/her unmitigated "love" to its landscape, its people, and its preservation. The land that he/she loves "more fruitlessly than before" defines it as an unproductive, useless love that fails to reach his/her desired results of mutual acceptance. Not only is the speaker's love fruitless, but the land itself is now futile, stuck in the brutal tug-of-war of the dominant European powers. The speaker's love is epitomized-it is purely selfless as he/she continues to dedicate him/herself without receiving anything in return. The relationship between a nationalist and his/her land is an integral part of defining identity. This is what Krog teaches us in land, as the speaker offers an unconditional love in the hope of becoming part of the pride the land carries, and not remaining the symbol of its scarring past. Krog warns the reader that when history is not forgiven, it hinders any chance of a full recovery in the future. ...read more.