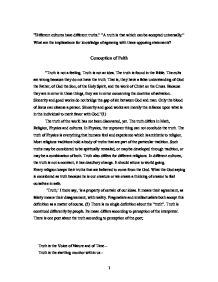 "Different cultures have different truths." "A truth is that which can be accepted universally." What are the implications for knowledge of agreeing with these opposing statements? Conception of Faith "Truth is not a feeling. Truth is not an idea. The truth is found in the Bible. The cults are wrong because they do not have the truth. That is, they have a false understanding of God the Father, of God the Son, of the Holy Spirit, and the work of Christ on the Cross. Because they are in error in these things, they are in error concerning the doctrine of salvation. Sincerity and good works do not bridge the gap of sin between God and man. Only the blood of Jesus can cleanse a person. Sincerity and good works are merely the reliance upon what is in the individual to merit favor with God."(1) The truth of the world has not been discovered, yet. The truth differs in Math, Religion, Physics and cultures. In Physics, the unproven thing can not conclude the truth. The truth of Physics is everything that humans feel and experience which is antithetic to religion. ...read more.

Culture doesn't have any written rule. It had occurred by people acting. It had had differences according to people living skills. So, it is different in different countries. It is passed to new generations by elder people. New generations learn it by experiencing. Firstly, they get it in family. When they meet others, their ways of seeing the world gets larger and they began to have different perspectives. In this situation, the truth of the different cultures has started to appear. Different cultures create their own truth according to their benefits which are interesting their trade, tourism, industry... etc. Aim of the all cultures is to spread their cultures through whole world and to make it known. During this aim, developing the country is expected. The truths of cultures are changing while their power of ruling the world is increasing. An improved property of a culture is adopted by the other cultures, quickly. Every culture is presented in every country; however every culture does not adopt the other cultures. There is the problem about the cultural differences. For example, hamburgers, mundane in the United States seemed exotic when introduced into China. ...read more.

There is no truth for religions that humans can not be part of occurring it. Religion is an inexplicable part of the world. There are so many claims about the beginning of humanity; however any of them can not be proven because no one could experience it. These are just theories about it. As known, theories do not reflect the truths. And different cultures internalize the different opinions, religions, theories. Therefore, it is not accepted that the same truths are shown for the different cultures. In science and Math, the truth is assumed universally because they are discovered by humans and are the collective work of humans. Humans prove the scientific theories as their mind can go far away. There are so many claims about science, too but unproven claims are not considered as scientific. Scientific arguments constitute the science truths and these are valid around the world. In short, there are two types of truth which are scientific and religious. Scientific truths should affect the whole world and should not have differences inside. However, religious truths do not have to cover all, because there is no a belief around the world. The conception of faith conflicts with science. And the all cultures conception of the faith does not match, so "Different cultures have different truths. ...read more.