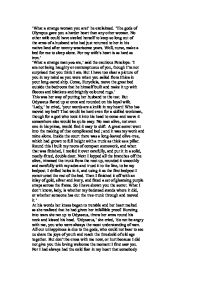 'What a strange woman you are!' he exclaimed. 'The gods of Olympus gave you a harder heart than any other woman. No other wife could have steeled herself to keep so long out of the arms of a husband who had just returned to her in his native land after twenty wearisome years. Well, nurse, make a bed for me to sleep alone. For my wife's heart is as hard as iron.' 'What a strange man you are,' said the cautious Penelope. 'I am not being haughty or contemptuous of you, though I'm not surprised that you think I am. But I have too clear a picture of you in my mind as you were when you sailed from Ithica in your long-oared ship. Come, Eurycleia, move the great bed outside the bedroom that he himself built and make it up with fleeces and blankets and brightly coloured rugs.' This was her way of putting her husband to the test. But Odysseus flared up at once and rounded on his loyal wife. 'Lady,' he cried, 'your words are a knife in my heart! Who has moved my bed? That would be hard even for a skilled workman, though for a god who took it into his head to come and move it somewhere else would be quite easy. ...read more.

The vile men who have been courting his wife Penelope and abusing his inexperienced and non-confident son, Telemachus, in hopes of competing for Penelope's hand in marriage will finally meet their match. The journey is complete, and destiny almost fulfilled. Odysseus' return home to Ithaca is at last coming to the end of its cycle. One can only imagine the swirling emotions that Odysseus must have felt when all his turmoil had come to a close. The ruthless and greedy Suitors who have infiltrated the humble and modest palace had their deaths written down by fate. When Odysseus reveals his inherent superiority to the suitors, they all suffer the same sort of humiliating and painful punishments. Their disrespectful and cowardly behaviour during Odysseus' twenty-year absence was returned with full vengeance. In the aftermath of the bloody battle, the faithful nurse, Eurycleia, informs Penelope of the return of her loving husband, though she discards the news without concern. Even the words of her own son do not seem to alter her emotions because she remains wary, afraid that a god is playing a trick on her. Telemachus rebukes her for not greeting Odysseus in a more loving manner because even he was unsure how to react when he first saw his father. ...read more.

Next I lopped all the branches off the olive, trimmed the trunk from the root up, rounded it smoothly and carefully with my adze and trued it to the line, to be my bedpost. I drilled holes in it, and using it as the first bedpost I constructed the rest of the bed. Then I finished it off with an inlay of gold, silver and ivory, and fixed a set of gleaming purple straps across the frame." The poignant statement unlocks a sympathetic response from the audience, as one can truly comprehend the compassion, faith and trust Odysseus had placed within Penelope. The mood and tone transform from anger and intensity to warmth and sympathy. It was destiny that set them apart and destiny that brought them together; it was all meant to be. The wedding bed represents the tranquility of the relationship between Odysseus and Penelope, husband and wife. The distinct similarities between Odysseus and Penelope, especially their crafty minds, show that their marriage can never fail, no matter what obstacles come between them. Even with the stress, anxiety and confusion in their given situations, this special bond always seemed to guide both Odysseus and Penelope towards the correct path. The theme of the loss and regaining of identity can be incorporated with Odysseus and Penelope. Their time away from one another results in them losing their identities and Odysseus' response to the wedding bed question allows their identities to blossom once again. ...read more.