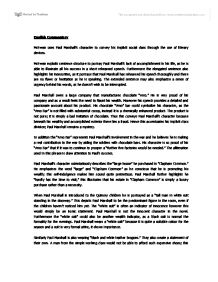 English Commentary McEwan uses Paul Marshall's character to convey his implicit social class through the use of literary devices. McEwan exploits sentence structure to portray Paul Marshall's lack of accomplishment in his life, as he is able to illustrate all his success in a short rehearsed speech. Furthermore the elongated sentence also highlights his insecurities, as it portrays that Paul Marshall has rehearsed his speech thoroughly and there are no flaws or hesitation as he is speaking. The extended sentence may also emphasize a sense of urgency behind his words, as he doesn't wish to be interrupted. Paul Marshall owns a large company that manufactures chocolate "Amo." He is very proud of his company and as a result feels the need to flaunt his wealth. Moreover his speech provides a detailed and passionate account about his product. ...read more.

Paul Marshall further highlights he "hardly has the time to visit," this illustrates that his estate in "Clapham Common" is simply a luxury purchase rather than a necessity. When Paul Marshall is introduced to the Quincey children he is portrayed as a "tall man in white suit standing in the doorway." This depicts Paul Marshall to be the predominant figure in the room, even if the children haven't noticed him yet. The "white suit" is often an indicator of innocence however this would simply be an ironic statement. Paul Marshall is not the innocent character in the novel. Furthermore the "white suit" could also be another wealth indicator, as a black suit is normal the formality for the evenings. Paul Marshall wears a "white suit" because it is quite a suitable colour for the season and a suit is very formal attire, it shows importance. ...read more.

Perhaps it is more the label drop that boosts his ego. Paul Marshall's overall appearance exudes power and wealth. When he discusses "Hamlet" with Lola, he declares it "one of my favourites." He is able to utter the most common phrase from the play, without having actually seen the play. "He too had neither read nor seen the play," implies that appearances mean everything to him. Paul Marshall also needs to exploit his wealth in front of the children. Although he has not "read nor seen the play" he says he has just for appearances. Overall Paul Marshall's social class remains implicit, this is because although Paul believes in appearances, he only believes in appearances. In the short extracts we have read about him he presents himself in a manner that suggests he is from a wealthy social class, even in front of the children. However beneath his "appearance" there lies Paul Marshall from an unidentified social class. ...read more.