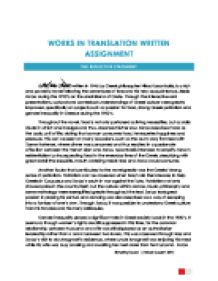 WORKS IN TRANSLATION WRITTEN ASSIGNMENT THE REFLECTIVE STATEMENT Zorba the Greek, written in 1946 by Greek philosopher Nikos Kazantzakis, is a rich and powerful novel following the adventures of Boss and his new acquaintance, Alexis Zorba during the 1920's on the small island of Crete. Through the interactive oral presentations, cultural and contextual understandings of Greek culture were greatly improved, specifically on subjects such as passion for food, strong Greek patriotism and gender inequality in Greece during the 1920's. ...read more.

Kazantzakis intended to amplify Zorba's existentialism by incorporating food in the everyday lives of the Greek, describing with great detail the exquisite, mouth-watering meals Boss and Zorba would consume. Another factor that contributed to the novel greatly was the Greeks' strong sense of patriotism. Patriotism can be observed when Boss's old friend leaves to help Greeks in Caucasus and Zorba's youth in war against the Turks. Patriotism not only showed pride in the country itself, but the culture within; dance, music, philosophy and some mythology were exemplified greatly throughout the text. ...read more.

Gender inequality played a significant role in Greek society back in the 1920's. It seems as though women's rights are still suppressed in this time, for the common relationship between husband and wife was still displayed as an authoritarian leadership rather than a bond between two lovers. This was observed through Boss and Zorba's visit to old Anagnosti's residence, where uncle Anagnosti was enjoying his meal while his wife was busy cooking and awaiting her next order from her husband. Zorba also called women incomprehensible creatures, although as time progresses his views on women evolve and eventually oppose those of the modern society. ?? ?? ?? ?? Timothy Doan | [Word Count: 391] ...read more.