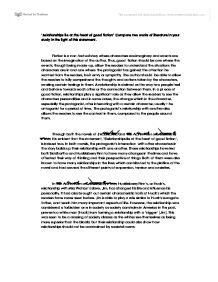 Relationships lie at the heart of good fiction

'Relationships lie at the heart of good fiction' Compare two works of literature in your study in the light of this statement. Fiction is a non-factual story where characters are imaginary and events are based on the imagination of the author. Thus, good fiction should be one where the events, though being made-up, allow the readers to understand the situations the characters are in and one where the protagonist has gained the attention he wanted from the readers, be it envy or sympathy. The author should be able to allow the readers to fully comprehend the thoughts and actions taken by the characters, evoking certain feelings in them. A relationship is defined as the way two people feel and behave towards each other or the connection between them. In a piece of good fiction, relationships play a significant role as they allow the readers to see the characters personalities and in some cases, the change which in the character, especially the protagonist, after interacting with a certain character, usually the antagonist for a period of time. ...read more.

This was seen as a cruel move as the widow had been providing for Huck for a period of time yet Huck still doesn't really feel a sense of regret when he told the boys that 'they could kill her'. However, there seem to be a change in Huck when he felt remorse after playing a trick on Jim and seeing how worried he was, about Huck's safety. Not only did Huck feel sorry for taking advantage of Jim's trust and friendship, he also apologized to Jim for playing such a trick on him. This move was an impactful one as blacks were seen as less worthy than whites, thus it is also unnecessary and scandalous for a white man to apologise to a black man. The reason Huck feel very bad and regretted his actions was due to the fact that he was not prepared for Jin's confession that his "heart wuz mos' broke bekase you wuz los', en I didn' k'yer no' mo' what become er me en de raf". This somber comment of Jim's had broke the heart of Huck's as he realized, just like the readers, that Jim values him ...read more.

His primary action, other than ferrying passengers across the river, seems to be listening to whatever wisdom the river imparts to him. He is such a powerful figure that when a desperate, suicidal Siddhartha, convinced he'll never reach enlightenment, encounters Vasudeva a second time, he asks to become Vasudeva's apprentice. In a way, Siddhartha relies on Vasudeva to save his life. This relationship is thus, an important and crucial one to the development of the novel plotline as Siddhartha, as mentioned earlier, would never had reached enlightenment without the help of Vasudeva. Vasudeva also gave advice to Siddhartha, such as the time where Siddhartha's son stole all of both Siddhartha's and Vasudeva's money. Instead of being furious with Siddhartha, Vasudeva consoles Siddhartha and told him to move on. Vasudeva's thinking has also influence Siddhartha's thoughts and beliefs as well. In conclusion, relationships play an important and vital role to the entire plot development of the 2 novels above. Both Huck and Siddhartha would not have became the people they were at the end of both novels if not for their relationship with Jim and Vasudeva respectively. Thus, I do believe that relationships do lie in the heart of good fiction. ...read more.