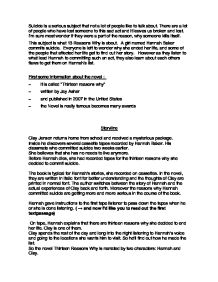 Review and commentary on &quot;13 reasons why&quot; by Jay Asher

Suicide is a serious subject that not a lot of people like to talk about. There are a lot of people who have lost someone to this sad act and it leaves us broken and lost. I'm sure most wonder if they were a part of the reason, why someone kills itself. This subject is what 13 Reasons Why is about. A girl named Hannah Baker commits suicide. Everyone is left to wonder why she ended her life, and some of the people that affected her life get to find out her story. However as they listen to what lead Hannah to committing such an act, they also learn about each others flaws to get them on Hannah's list. First some information about the novel : * it is called "Thirteen reasons why" * written by Jay Asher * and published in 2007 in the United States * the Novel is really famous becomes many awards Storyline Clay Jenson returns home from school and received a mysterious package. Inside he discovers several cassette tapes recorded by Hannah Baker. His classmate who committed suicide two weeks earlier. She believes that she has no needs to live anymore. Before Hannah dies, she had recorded tapes for the thirteen reasons why she decided to commit suicide. The book is typical for Hannah's stories, she recorded on cassettes. In the novel, they are written in italic font for better understanding and the thoughts of Clay are printed in normal font. ...read more.

When they are at the Diner, Hannah went through sexual harassment. At the Diner, Zach Dempsey, was a witness and saw the whole confrontation between the two students. Instead of helping her, Zach made the situation worse. Hannah's hobby was to write poems. Through the poem, Hannah was able to express herself and reduce stress. Ryan Shaver, a member of the school newspapers shared one of Hannah's private poem. He steeled the poem of Hannah's and published it. Because of that, he took Hannah's pride to write poetry away. Clay Jensen, the co-narrator is the ninth one of the thirteen reasons why Hannah decided to commit suicide.(--> so now i'd like you to read out this texpassage) This is the most significant section ,because Hannah could have survived from her pain. Clay had a secret crush on Hannah and she also fell in love with Clay. However, Hannah was unable to manage her emotions towards everything and acted cruelly to Clay. Unlike the other characters, Clay is on the list because Hannah regrets not being able to know Clay. On the other hand, Clay feels guilty not being able to be on Hannah's side. At a school party, after Hannah kissed Clay and pushing him back away, if Clay did not leave, he kept believing that Hannah would have had a reason to survive. Clay goes through all the points that are listed on the tape to have a flashback of Hannah. ...read more.

He worked in various establishments, including as a salesman in a shoe store, in libraries and book stores. Many of his experiences had an impact on some aspects of his writing. Today he lives in Arcadia in California and is married. "Thirteen Reasons Why" is his first published novel and he got the idea for it at a museum. While talking an audio tour, he was struck by an eeriness of the voice in his ear - a woman who described exactly what he was looking at, but wasn't there. I Choose this book , because it is sad, thoughtful, heartbreaking, and emotional at the same time! Hannah Baker gives you the idea of what can happen if rumours go their own way and what they can do to you. Hannah Baker just wanted to get her first kiss. And after getting her first innocent and sweet kiss, the boy who kissed her, tells everyone that a lot more has happened - that Hannah is a slut. And this is only the beginning of something which ended in a suicide. i think that the reason for this book is to show that even little things that you do to a person, even if you don't realize what you're doing, you can really mess with a persons life. so like the moral to the story is to watch how you act and say to others because what you do can end up being positive or negative to that persons life. ...read more.