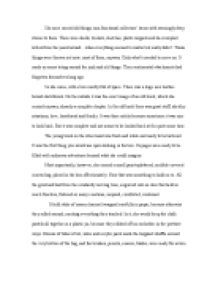 She once carried old things, non-functional collectors items with seemingly deep stories to them.

﻿She once carried old things, non-functional collectors? items with seemingly deep stories to them. There were shells, trinkets, sketches, photo snippets and de-crumpled letters from the years behind?when everything seemed to matter but really didn?t. Those things were thrown out now, most of them, anyway. Only what?s needed to move on. It made no sense toting around the junk and old things. Their sentimental attachments had forgotten themselves long ago. So she came, with a box mostly full of space. ...read more.

But it was complete and not meant to be looked back at for quite some time. The young book on the other hand was fresh and white and ready to be battered. It was the first thing you would see upon looking in the box. Its pages were ready to be filled with unknown adventures beyond what she could imagine. Most importantly, however, she carried a small paint-splattered, scribble-covered canvas bag, placed in the box affectionately. ...read more.

Dozens of tubes of oil, water and acrylic paint made the happiest shuffle around the very bottom of the bag, and the brushes, pencils, erasers, blades, were ready for action any time. They were always hard workers. That canvas bag was hope for the future. It was loyal, and an unintentional autobiography. There was always something in there that she could count on. So that?s why she came with her bag, in her box, mostly full of space. She carried only what she needed, not too much, just enough. The space she carried was full of passion, and yet-to-be-formed ideas, bursting with eagerness to become so much more. ...read more.