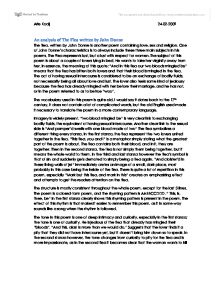 An analysis of The Flea written by John Donne The flea, written by John Donne is another poem containing love, sex and religion. One of John Donne's characteristics is to always include these three main subjects in his poems. The Flea represents lust, but a lust with respect for women. The subject of this poem is about a couple of lovers lying in bed. He wants to take her virginity away from her. In essence, the meaning of this quote: "And in this flea our two bloods mingled be" means that the flea has bitten both lovers and that their blood is mingled in the flea. The act of having sexual intercourse is considered to be an exchange of bodily fluids, not necessarily being all about love and lust. The lover also feels some kind of jealousy because the flea has already mingled with her before their marriage, and he has not, or in the poem referred to as to befroe "woo". The vocabulary used in this poem is quite old, I would say it dates back to the 17th century, it does not ...read more.

There is quite a lot of repetition in this poem, especially "Mark but this flea, and mark in this" creates an emphasizing effect and attempts to get the readers attention on the flea. The structure is mostly consistent throughout the whole poem, except for the last 3 lines. The poem is a closed-form poem, and the rhyming pattern is AABBCCDDD. " This, is, thee, be" in the first stanza clearly shows this rhyming pattern is present in the poem. The effect of this rhythm is that makes it easier to remember this poem, as it in some way sounds like a song when the rhythm is followed. The tone in this poem is one of deep intimacy and curiosity, especially in the first stanza; the tone is one of curiosity. He is jealous of the flea that already has mingled their "bloods". "And this, alas! Is more than we would do." Suggests that the lover finds it a pity that they did not have intercourse yet, but it doesn't bring him down so to speak. ...read more.

The first stanza represents the foreplay, a small thing such as the flea sucking the blood of both, with a sexual connotation "it suck'd me first, and now sucks thee" is a playful connotation of for example intimate kisses. Then it builds up in intensity as the man attempts to persuade her but fails at protecting the innocent flea's life; finally the woman kills it, which would be the climax. The final stanza is simply reflecting upon what just happened and the pace slows down again, the relaxation. To conclude this essay, I believe this poem is about two people who deeply love each other and the lover tries to persuade the woman into losing her virginity to him. This poem is about the intimate relationship, love, and sex and religion. Religion as in the marriage bed and marriage temple and not having sex before "woo". It refers to human nature as all of us have the same desire and feelings in us. Most of us will find their true love at some point and experience the mingling of their blood. Not necessarily of course, but I believe that for most of us this is true. Arie Kooij 24-02-2009 ...read more.