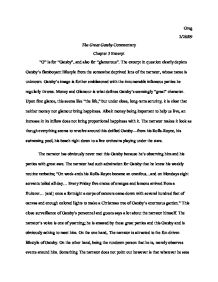 Greg 2/26/09 The Great Gatsby Commentary Chapter 3 Excerpt "G" is for "Gatsby", and also for "glamorous". The excerpt in question clearly depicts Gatsby's flamboyant lifestyle from the somewhat deprived lens of the narrator, whose name is unknown. Gatsby's image is further emblazoned with the innumerable infamous parties he regularly throws. Money and Glamour is what defines Gatsby's seemingly "great" character. Upon first glance, this seems like "the life," but under close, long-term scrutiny, it is clear that neither money nor glamour bring happiness. Albeit money being important to help us live, an increase in its inflow does not bring proportional happiness with it. The narrator makes it look as though everything seems to revolve around this deified Gatsby-from his Rolls-Royce, his swimming pool, his beach right down to a live orchestra playing under the stars. The narrator has obviously never met this Gatsby because he's observing him and his parties with great awe. ...read more.

People who are extremely flamboyant and over-concerned with appearances almost always end up having no real reason for doing anything in life. The purpose of the narrator is to set up a grand entrance for Gatsby by creating a sense of eminence as well as merit. He portrays him as the best there is-the cream of his crop-plain and simple. In the narrator's astounded eyes, Gatsby wakes up in the morning to release excellence. The excerpt has no theme; instead describes with great stalker-like detail Gatsby's lifestyle and eggstravagance (get it? West and East Egg?). Words like "dark gold," "full swing," "earth lurches away from the sun" imply a positive denotation that portrays the parties as absolutely fabulous. The language in question is successful in doing precisely what the narrator wants it to; it serves as a tool for him/her to convey Gatsby's character in great depths. ...read more.

Another slight reference to the time period is the mention of the "Follies," which was a well-known stage show during the Twenties. The Follies represented how a lot of young people behaved at that time: fun-loving, foolish and lacking sobriety. In the excerpt presented, the narrator's choice of words conveyed a great deal. The author wrote in a manner that any typical adult could understand and relate to. This suggests that the indented audience is the general public-people who are, or have known someone as extravagantly wasteful as Gatsby. The word choice created a tone that was highly critical-it gave the story a light-spirited feel. Throughout the vivid descriptions, the narrator used a wistful and slightly melancholic tone. Even though neither the reader nor the narrator have met Gatsby, the narrator sets up this out-of-this-world image of him leading the reader to believe that he is indeed "Great." In the readers' eyes, Gatsby is just another wasteful rich man, but to the narrator, Gatsby is the life of the party, the beacon of glamour, gold and ultimately hope. ...read more.