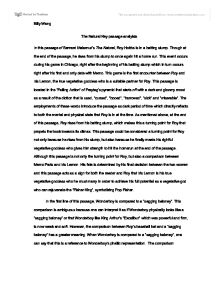 The Natural Key passage analyisis In this passage of Bernard Malamud's The Natural, Roy Hobbs is in a batting slump. Though at the end of the passage, he rises from his slump to once again hit a home run. This event occurs during his game in Chicago, right after the beginning of his batting slump which in turn occurs right after his first and only date with Memo. This game is the first encounter between Roy and Iris Lemon, the true vegetative goddess who is a suitable partner for Roy. This passage is located in the "Falling Action" of Freytag's pyramid that starts off with a dark and gloomy mood as a result of the diction that is used, "cursed", "booed", "harrowed", "sick" and "miserable". The employments of these words introduce the passage as dark period of time which directly reflects to both the mental and physical state that Roy is in at the time. As mentioned above, at the end of this passage, Roy rises from his batting slump, which makes this a turning point for Roy that propels the book towards its climax. ...read more.

When she rises again, Roy "stole a quick look" and gains hope, because "he became aware that the night had spread out in all directions and was filled with an unbelievable fragrance". In the presence of Iris Lemon, Wonderboy regains its hardness and power and shoots the ball "through the light and up into the dark, like a white star seeking an old constellation". When Iris, the vegetative goddess who like Roy is a force of life and rejuvenation stands up, a stranger next to her feels a "strong sexual urge". This shows that Iris is a true vegetative goddess whose very presence causes a stranger to feel a "strong sexual urge". Her very presence also rejuvenates Wonderboy, Roy's metaphorical phallus. Iris, who has such a strong life force, "brought a child into the world" at an early age, becomes a "grandmother" at the age of thirty three and she also reveals at the end of the book that "I am pregnant" from their one and only encounter on the beach. This transfer of life and strength to Roy and Wonderboy from Iris allows Roy to hit the baseball so hard, that it metaphorically flies into space, towards a distant star. ...read more.

Memo and Iris are complete opposites, while one sucks the energy and life out of Roy, the other rejuvenates and provides a life-giving force that gave him energy. Although towards the end of the book, Roy makes the wrong choice of choosing Memo instead of Iris due to his childish lust and sexual impulse. He continues to seek to break records instead of focusing on his true goals to rejuvenate Pop Fisher and the Knights. Despite Iris's gentleness, powers that helped him though his slump and dissimilarity from Memo as she is not the "type of dame I always fell for--they weren't like you." He ignores the hints that Iris is the one that he is destined to be with, because he is afraid of the responsibilities of being with Iris, as she is a grandmother, which in turn would make him a grandfather. Warned multiple times, by Pop's warning, she "weakens a man", her surname name "Paris", her "sick breast" and her complete opposite nature to Iris, Roy does not realize that Memo is the temptress and his true goals as a vegetative god along with his potential destiny with Iris until it was too late. ?? ?? ?? ?? Billy Wang ...read more.