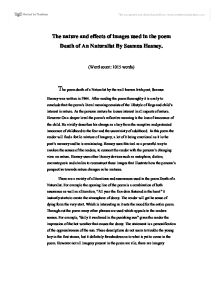 The nature and effects of images used in the poem Death of An Naturalist By Seamus Heaney.

The nature and effects of images used in the poem Death of An Naturalist By Seamus Heaney. (Word count: 1015 words) The poem death of a Naturalist by the well-known Irish poet, Seamus Heaney was written in 1964. After reading the poem thoroughly it is easily to conclude that the poem's literal meaning consists of the lifestyle of frogs and child's interest in nature. As the persona mature he looses interest in all aspects of nature. However On a deeper level the poem's reflective meaning is the loss of innocence of the child. He vividly describes his change as a boy from the receptive and protected innocence of childhood to the fear and the uncertainty of adulthood. In this poem the reader will find a fertile mixture of imagery, a lot of it being emotional as it is the poet's memory and he is reminiscing. Heaney uses this tool as a powerful way to awaken the senses of the readers, to connect the reader with the persona's changing view on nature. ...read more.

Word such as slobber, pop, slap crocked and fating portrays the realism of how the flax dam is. This helps the reader to visualize the flax dam, as most readers might not be aware of what a flax dam is. The word slobber is an interesting choice of onomatopoeia as it effectively conveys the boy's relish for the world around him. Onomatopoeic use of words such as "clotted" and "jellied" shows how the persona vied the natural world. Also how he compared frogspawn to cream and jam, some thing that could be touched and enjoyed. Onomatopoeia is used to describe the nature and the surrounding a lot in the first stanza of the poem. In the second stanza onomatopoeic is used It is also used to illustrate the uncertainty that is going through the persona's mind. Sibilant words are also used in the poem. This appeals to the sense of sound as the reader examines the poem. ...read more.

This experience has transformed the boy's view on nature but on a much deeper level perception of the world and life. He understand as he grows mature that it is no longer a place for unquestioning sensuous delight, but it a dynamic world on uncertainty. Thee poem centers on the idea of childhood memories that begin as innocent, pleasurable experiences rooted in nature but ends with disillusion. Heaney addresses all possible senses of the reader through out the poem by using effective imagery techniques. Heaney uses other literary devices to re create these imagery that awaken the senses of the reader. Heaney addresses the issue that though admiration and enjoyment play a huge role in our life experiences, perhaps there is more to what we feel and see. That the innocence of childhood and the wonders of nature are in fact transient, and disappointment is inevitable and has to be confronted. Through effective use of diction, Heaney builds up a convincing account of a childhood experience that deals with excitement, pain and confusion of growing up. ...read more.