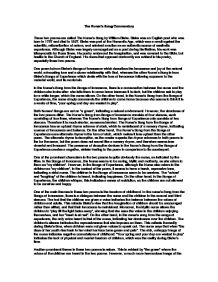 The Nurse's Song Commentary These two poems are called The Nurse's Song by William Blake. Blake was an English poet who was born in 1757 and died in 1827. Blake was part of the Romantic Age, which was a revolt against the scientific, rationalization of nature, and admired emotion as an authentic source of aesthetic experience. Although Blake was largely unrecognized as a poet during his lifetime, his work was idiosyncratic for those times. His poetry embraced the imagination, and was reverent to the Bible, but hostile to the Church of England. His views that opposed conformity are evident in his poetry, especially these two poems. One poem is from Blake's Songs of Innocence which describes the innocence and joy of the natural world, advocating love and a closer relationship with God, whereas the other Nurse's Song is from Blake's Songs of Experience which deals with the loss of innocence following exposure to the material world, and its mortal sin. In the Nurse's Song from the Songs of Innocence, there is a conversation between the nurse and the children she looks after: she tells them to come home because it is dark, but the children ask to play for a while longer, which the nurse allows. ...read more.

On the other hand, in the Songs of Experience, the children whisper, this indicates a sense of restriction, so the children are not allowed to be carefree and happy. One of the main themes in these two poems is the freedom of childhood. In the nurse's Song from the Songs of Innocence, there is a dialogue between the nurse and the children in the second and third stanzas. The fact that the children are given a voice indicates the balance between the voices of children and adults. This reflects Blake's view that the imagination of children should be encouraged rather than stifled, and that their innocence is maintained. Moreover, the idyllic nurse allows the children to "play till the light fades away", showing that she sees the value in the children enjoying themselves, and her "heart is at rest". On the other hand, in the nurse's song from the songs of experience, the only voice heard is that of the nurse, indicating her dominance over the children. The children's silence indicates the repressiveness that she imposes on them. This reflects the reality during Blake's time, when children were not given voices to speak out. ...read more.

Various literary devices are used in these two poems. In the poem from the songs of innocence, "the little ones leaped, and shouted, and laughed". The use of a list of three active words creates a cheerful, idyllic image of childhood and freedom. Both poems begin with the same first line, "when the voices of children are heard on the green". This repetition is deceptive, as this sets the reader's expectations up to think that both poems will have similar tones when in fact they are very different. The poem from the songs of innocence uses an anti-climax at the end of the poem, as the light will not last forever, which creates a letdown of emotions, perhaps foreshadowing the dismal situation of childhood, as presented in the second poem. To conclude, Blake creates two very different images of nurses in these two poems. The poem from the songs of innocence is called THE nurse's song, which indicates that it is a single, idealistic nurse, whereas the poem from the songs of experience is simply called nurses song, which is more generalistic, and therefore reflects the reality of society. The two poems create a contrast between Blake's idea of an idyllic childhood and the reality of his time, therefore criticising societal values and attitudes towards children. ...read more.