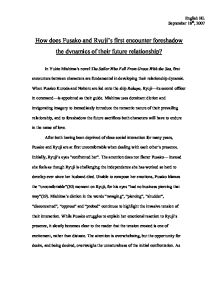 The Sailor Who Fell from Grace with the Sea

How does Fusako and Ryuji's first encounter foreshadow the dynamics of their future relationship? In Yukio Mishima's novel The Sailor Who Fell From Grace With the Sea, first encounters between characters are fundamental in developing their relationship dynamic. When Fusako Kuroda and Noboru are led onto the ship Rakuyo, Ryuji-its second officer in command-is appointed as their guide. Mishima uses dominant diction and invigorating imagery to immediately introduce the romantic nature of their prevailing relationship, and to foreshadow the future sacrifices both characters will have to endure in the name of love. After both having been deprived of close social interaction for many years, Fusako and Ryuji are at first uncomfortable when dealing with each other's presence. Initially, Ryuji's eyes "confronted her". The attention does not flatter Fusako- instead she feels as though Ryuji is challenging the independence she has worked so hard to develop ever since her husband died. Unable to compose her emotions, Fusako blames the "uncomfortable"(30) moment on Ryuji, for his eyes "had no business piercing that way"(29). ...read more.

This cargo has a double entendre since it also symbolizes Fusako's emotional baggage. In the "large, dark fissure", the emotionally suppressed Fusako has lived isolated from the world of love, happiness, and opportunity, and held captive by the "steel plates" of society's expectations. When lifted, the "slats of sunlight slipped nimbly over the crates as they wheeled through the air"(35). This recurring light imagery refers us back to the idea of light revealing the cargo, in the same way Fusako feels scrutinized by the strong sun; light sheds all the imperfections that shadows mask. But, "faster even then the shattered light the cargo sped"(35). This shows that Fusako, by letting go of the strict independence that has limited her life, is able to dominate over society's supposition. The light is "shattered" by the strength of Fusako's true emerging character. Ryuji is the one that has allowed her to take this "terrifyingly deliberate prelude and the sudden, reckless flight"(35). It is as if after years of independently brooding her husband's death that Fusako finally sees the chance to re-enter the world. ...read more.

He is finally able to focus, and realize what he wants in life - love, companionship, security. Not only does Ryuji reveal a strong interest in Fusako, but he expresses doubt concerning his current lifestyle at sea. He refers to it as a "miserable business"(31) and fails to emit "professional pride"(30). By allowing Fusako to take the role of Ryuji's "sighted vessel"(29), Mishima is foreshadowing the replacement of Ryuji's interest in Fusako for his dedication to his ship, and essentially the triumph of Fusako's presence on land for his lonely existence at sea. Mishima manages to uncover the complex nature of Fusako and Ryuji's relationship within just the brief moments of their first encounter. He marks the beginning of a dominant romantic connection that fuels the novel's plot as both characters continue to make sacrifices-Fusako in surrendering her independence and Ryuji in giving up his dream of achieving glory at sea. However, although portrayed as love throughout the novel, both characters are motivated by a requisite to fill a certain void of affection. The reader is made to wonder whether it was really true love that was discovered at their first encounter, or a mere mutual greed for intimacy. Word count: 1025 ...read more.