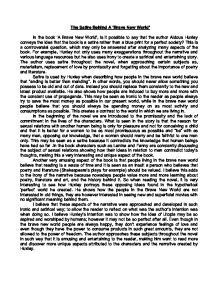 The Satire Behind A Brave New World(TM)

The Satire Behind A 'Brave New World' In the book 'A Brave New World', is it possible to say that the author Aldous Huxley conveys the idea that the book is a satire rather than a blue print for a perfect society? This is a controversial question, which may only be answered after analyzing many aspects of the book. For example, Huxley not only uses many exaggerations throughout the narrative and various language resources but he also uses irony to create a satirical and entertaining story. The author uses satire throughout the novel, when approaching certain subjects as, materialism, replacement of love by promiscuity and forgetting about the importance of poetry and literature. ...read more.

What is seen in the story is that the reason for sexual relations with another human being is only for pleasure and not for conceiving a child and that it is better for a woman to be as most promiscuous as possible and "be" with as many men, opposing our knowledge, that a woman should marry and be faithful to one man only. This may be seen as a satire because it contradicts the knowledge that human beings have had so far .In the book characters such as Lenina and Fanny are constantly discussing the subject of sexual relations showing how their ideas in relation to men contradict today's thoughts, making this a very interesting and unique aspect of the book. ...read more.

I believe that these aspects of the narrative were approached and developed in such ironic and satirical way; to allow the reader to reflect on what was the author's intention was when doing so. I believe Huxley's intention was to show how the idea of Utopia may be so aspired and worshiped by humans; however it may not be so perfect after all. Even though in the brave new world people are always happy, they don't experience feelings of love and even though they have the power to consume products in such great amounts, they are not allowed to the power of freedom. The author approaches these subjects throughout the novel in such way that it is amusing and entertaining to the reader, making him want to read more and discover more unique aspects attributed to the characters and the narrative created by Huxley. ?? ?? ?? ?? ...read more.