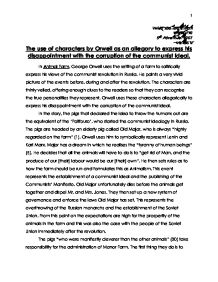 The use of characters by Orwell as an allegory to express his disappointment with the corruption of the communist ideal.

Vivek Radhakrishnan English 10 5th November 2007 Period B The use of characters by Orwell as an allegory to express his disappointment with the corruption of the communist ideal. In Animal Farm, George Orwell uses the setting of a farm to satirically express his views of the communist revolution in Russia. He paints a very vivid picture of the events before, during and after the revolution. The characters are thinly veiled, offering enough clues to the readers so that they can recognise the true personalities they represent. Orwell uses these characters allegorically to express his disappointment with the corruption of the communist ideal. In the story, the pigs that declared the idea to throw the humans out are the equivalent of the 'Politburo', who started the communist ideology in Russia. The pigs are headed by an elderly pig called Old Major, who is always "highly regarded on the farm" (1). Orwell uses him to symbolically represent Lenin and Karl Marx. Major has a dream in which he realises the "tyranny of human beings" (5). He decides that all the animals will have to do is to "get rid of Man, and the produce of our [their] labour would be our [their] own". He then sets rules as to how the farm should be run and formulates this as Animalism. ...read more.

This symbolizes the way Stalin used the Narodniy Komissariat Vnutrennikh Del (NKVD) to chase Trotsky out of Soviet Union and eventually assassinated him. This was an absolute deviation from the original intentions of equality to all in animalism and in the communist ideal. The pigs needed a mean of covering up the corruption done by them from the other animals. They came up with the idea of utilising a propagandist who would mislead the animals and distort the facts. This propagandist is none other than Squealer. He is representative of the Soviet Union's Ministry of Information or Pravda, both mediums of propaganda for the USSR. The job of Squealer was to maintain the superiority of the 'ruling' pigs who symbolized the Politburo. Squealer employs all methods possible to make the animals believe him, he says: "You do not imagine, I hope, that we pigs are doing this in a spirit of selfishness and privilege? .... Our sole object in taking these things is to preserve our health. Milk and apples (this has been proved by Science, comrades) contain substances absolutely necessary to the well being of a pig. .... The whole management and organisation of this farm depend on us .... Do you know what would happen if we pigs failed in our duty? Jones would come back!" The above is a clear example of how Squealer would justify each and every action of the pigs. ...read more.

The pigs' promise to get him treated in a hospital. However, they have nothing such as that in their minds. The pigs "taking [sent] Boxer to the knacker's!" (79). This is preposterous behaviour on the part of the pigs as they have gone down to the limit of killing the best and the most hardworking animal on the farm just because he is hurt, wishes to retire and will not be able to do any more labour. This strong imagery of the hardships of the common man demonstrates the deep anguish felt by Orwell for the victims of the Russian Revolution. The most tragic event that leads to the absolute failure of the revolution is the pigs slowly becoming human beings. Orwell uses this event to portray how the Soviets who actually set off the Russian Revolution in a hope of a bright new future but end up only replacing the former high classes with themselves. The pigs sequentially break each and every one of the established laws of Animalism. They even abolish all the laws and make one new law that states: "All animals are equal but some animals are more equal than others." (88) The pigs befriend their old foes, humans, these were people who had once suppressed and enslaved all the animals. They finally do the most prohibited thing according to Animalism by having human habits such as gambling, drinking, and walking upright. Orwell reaches the zenith of disappointment at this point and says that "it was impossible to say which was which". ...read more.