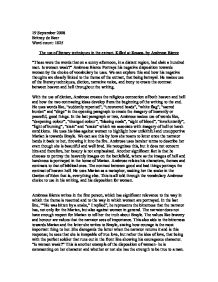 The use of literary techniques in the extract, Killed at Resaca, by Ambrose Bierce

19 September 2008 Britney de Beer Word count: 1025 The use of literary techniques in the extract, Killed at Resaca, by Ambrose Bierce "These were the words that on a sunny afternoon, in a distant region, had slain a hundred men. Is women weak?" Ambrose Bierce Portrays his negative disposition towards women by the choice of vocabulary he uses. We can explore this and how his negative thoughts are closely linked to the theme of the extract, that being betrayal. He makes use of the literary techniques, diction, narrative voice, and irony to create the contrast between heaven and hell throughout the writing. With the use of diction, Ambrose creates the religious connection of both heaven and hell and how the two contrasting ideas develop from the beginning of the writing to the end. He uses words like, "suddenly repented", "uncovered heads", "white flag", "sacred burden" and "dirge" in the opening paragraph to create the imagery of heavenly or peaceful, good things. ...read more.

The narrator does not have enough respect for Marian to tell her the truth about Brayle. The values like bravery and honour are values that the narrator sees of importance. This also aids to the bitterness towards Marian and the letter she writes to Brayle, stating how courage is the most important thing to her. She disregards the letter when the narrator returns it and is this response; he sees that she is incapable of true love, but rather the idea of love, that being with the perfect soldier that runs out in the front line showing his courageous character. "Is women weak?" This is another example of the disposition of women- he is commenting on her character and whether or not she has the strength to be true to a man. The Narrator had, "involuntarily risen to rescue the scrap of paper", shows us that he found the letter sacred because of the fact that lieutenant Brayle did not cower back because of what was written in the letter. ...read more.

of men", meaning that Marian is quite fussy; even though she has a few men after her, she will not just settle with one. The narrator defends Brayle's honour in the last line of the writing by not giving Marian the satisfaction of another man she has influenced in such a way, that she was able to control his life and, death. The letter is the key in the writing; Brayle dies over it, the narrator fights for it as well as generates his disliking towards Marian because of her reaction towards the letter. The contrast between Heaven and Hell is prominent throughout the writing and plays a role on portraying the theme-betrayal. Marian betrays Brayle by her reaction to, the fact that the narrator suggests that he died one of the bravest and truest of hearts on the field, and her reaction to the letter that so easily killed Brayle and so many serving under him. "Is women weak?" Yes, women are weak in this writing and narrator makes it very clear. ...read more.