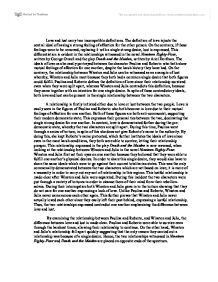 Love and lust carry two incompatible definitions. The definition of love injects the central ideal of having a strong feeling of affection for the other person. On the contrary, if these feelings were to be removed, replacing it with a single strong desire, lust is expressed. This differentiation is evident in the relationships witnessed in the novel Nineteen Eighty-Four, written by George Orwell and the play Death and the Maiden, written by Ariel Dorfman. The ideals of love can be easily portrayed between the character Paulina and Roberto who both show mutual feelings of affection for one another, despite the harsh history they have had. On the contrary, the relationship between Winston and Julia can be witnessed as an example of lust whereby, Winston and Julia meet because they both had a common single desire that both figures could fulfill. ...read more.

This expresses their personal ties between the two, decimating the single strong desire for one another. In context, love is demonstrated further during the pre-democratic state, whereby the two characters are split apart. During this time, Paulina went through a series of torture; in spite of this she does not give Roberto's name to the authority. By doing this, she kept Roberto's name protected, which further institutes the ideals of love since even in the most harsh conditions, they both were able to survive, letting their relationship prosper. This relationship expressed in the play Death and the Maiden is now reversed, when looking at the relationship between Winston and Julia in the novel Nineteen Eighty-Four. ...read more.