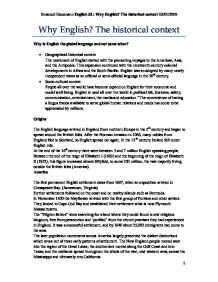 Why is English the global language and not some other?

Why English? The historical context Why is English the global language and not some other? * Geographical-historical context The movement of English started with the pioneering voyages to the Americas, Asia, and the Antipodes. This expansion continued with the nineteenth-century colonial developments in Africa and the South Pacific. English was so adopted by many newly independent states as an official or semi-official language in the 20th century. * Socio-cultural context People all over the world have become depend on English for their economic and social well-being. English is used all over the world in political life, business, safety, communication, entertainment, the media and education. "The convenience of having a lingua franca available to serve global human relations and needs has come to be appreciated by millions. Origins The English language arrived in England from northern Europe in the 5th century and began to spread around the British Isles. After the Norman invasion in 1066, many nobles from England fled to Scotland, so English spread out again. In the 12th century Ireland fell under English rule. At the end of the 16th century there were between 5 and 7 million English speaking people. Between the end of the reign of Elizabeth I (1603) ...read more.

The slaves were shipped in barbarous conditions to the Caribbean islands and the American coast. By the time of the American Revolution (1776) their numbers had grown to half a million, and there were over 4 million by the time slavery was abolished, at the end of the US Civil War (1865). The policy of the slave traders was to bring people of different language backgrounds together in the ships, to make it difficult for groups to plot rebellion. The result was the growth of several pidgin forms of communication, and in particular a pidgin between the slaves and the sailors, many of whom spoke English. Once arrived in the Caribbean, the pidgin English continued to act as a means of communication between black population and the new landowners, and among the blacks themselves. Then, when their children were born, the pidgin gradually began to be used as a mother tongue, producing the first black creole speech in the region. In this creole English which rapidly came to be used throughout the southern plantations, and in many of the coastal town and islands. At the same time, standard British English was becoming a prestige variety throughout the area, because of the emerging political influence of Britain. ...read more.

The Company established its first trading station in Surat in 1612, and by the end of the century others were in existence in Madras, Bombay and Calcutta. During the period of British sovereignty, from 1765 until independence in 1947, English gradually became the medium of administration and education throughout the subcontinent. The language question attracted special attention during the early 19th century, when colonial administrators debated the kind of educational policy which should be introduced. When the universities of Bombay, Calcutta and Madras were established in 1857, English became the primary medium of instruction, thereby guaranteeing its status and steady growth during the next century. In India, the bitter conflict between supporters of English, Hindi and regional languages led in the 1960s to a 'three languages formula', in which English was introduced as the chief alternative to the local state language. It now has the status of an 'associate' official language with Hindi the official language. It is also recognized as the official language of states and eight Union territories. English has, as a consequence, retained its standing within the government administration, secondary and higher education, the armed forces, the media, business, and tourism. In Pakistan, it is an associated official language. Increasingly it is being perceived by young South Asian as the languages of cultural modernity. ?? ?? ?? ?? Emanuel Hausmann English SL: Why English? The historical context 03/01/2009 1 ...read more.