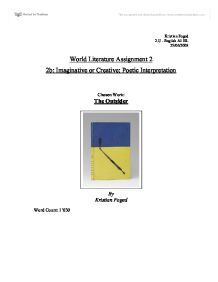 Kristian Foged 2.U - English A1 HL 25/06/2008 World Literature Assignment 2 2b: Imaginative or Creative; Poetic Interpretation Chosen Work: The Outsider By Kristian Foged Word Count: 1'030 Statement of Intent For my World Literature Assignment 2 I chose to write an assignment under the 2b section; an imaginative or creative assignment. The ensuing piece will be based on The Outsider by Albert Camus and will revolve around the last three pages of chapter 6 of part 1; pages 58-60. This is the turning point in the book where the protagonist kills the man referred to as the "Arab." After this episode part 2 of the novel begins and we follow Meursault's court case. The Outsider was first published in 1942 and is still among the most popular existentialism novels today. Camus creates a character with an extremely subjective mind, almost to the point where the reader is not sure if the protagonist has feelings. Meursault is more interested in his physical surroundings than the social and emotional ones. ...read more.

These are the themes expressed in the final bit of part 1 of The Outsider. Essentially, the poem will be an interpretation of the event that is the novel's turning point. The purpose is to, in a poetic manner and in fewer words, to capture the essence of those three pages. To express them in a poem I will use the first stanzas to build up the atmosphere of the intense heat and the gradual effect it has on the protagonist. Even though I am trying to create the same atmosphere as Camus I have decided only to use one metaphor from the book; the personification of the waves as they "gasp for breath," simply because it is my favourite in this part of the book. To further develop the intensity of the heat I will have to, as Camus did, use all of Meursault's surroundings, not just the sun. The poem will try to give credit and express the effects of the different pieces of nature surrounding him; the sand, his own sweat, the spring, etc. ...read more.

The fervour heightens, Flooding me in a red sea, A sea of salty beads of perspiration, And of anger and frustration, The thin line of comfortable warmth over trod. Same sun, same sand, same light, Only this time the intensity burns, As even the waves began to gasp for breath, And the spring calls me to it, Whilst the desert beach presses me forward. My steel manages to retain its cool, And his follows suit, We both grip the cool metal, As I continue to press forth, Pressured by the beach, Drawn forth by the spring. His steel shimmers in the light, The reflecting ray stabs my eyes, Blinded by light and sweat, The sound of gunshot rips the air, I sink four more in him. The silence broken, The peace of the beach gone, The fervour had committed murder, But it was the fervour of heat, Not passion. The cool of the steel returns, Annoyed that the day is no longer happy, I wait for it, but remorse never grips me. 1 Page 57, "The Outsider" by Albert Camus: Meursault's thoughts when Raymond hands him a gun. ?? ?? ?? ?? ...read more.