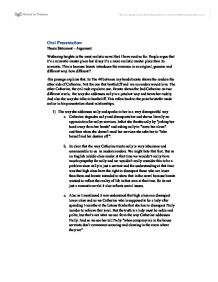 Oral Presentation Thesis Statement - Argument: Wuthering heights is the most realistic novel that I have read so far. People argue that it's a romantic master piece but id say it's a more realistic master piece than its romantic. This is because bronte introduces the romance in an original, genuine and different way. how different? this passage explains that. In The 40 between my hands bronte shows the readers the other side of Catherine. Not the one that heathcliff and we as readers would love. The other Catherine, the evil rude repulsive one. Bronte shows the bad Catherine on two different levels, the way she addresses nelly in a petulant way and treats her rudely. And also the way she talks to heathcliff. This refers back to the point kristofer made earlier in his presentation about relationships. 1) The way she addresses nelly and speaks to her in a very disrespectful way a. Catherine degrades nelly and disrespects her and shows literally no appreciation for nellys services. Infact she thanks nelly by "jerking her head away from her hands" and asking nelly to "leave her alone". ...read more.

The attitude towards Heathcliff in the passage is very ironic since again it should be a "romantic" love novel about Heathcliff & Catherine. So their love is the main focus but as we see theres not love at all here, actually it seems that Catherine is detesting Heathcliff even though hes showing her love. Bronte shows reality her ignoring the fact that readers would hate that since in all the other novels its always happy love which became more of like fantasy and lost its realism. But bronte brings back that realism through Catherines attitude towards Heathcliff. b. Bronte is trying to show us as readers that this forever love doesn't really exist and that its social status that usually plays the role in choosing the future spouse. Love plays a very tiny role which is always dominated by the social and family expectations. This leads us to one question, does true love really exist? That's what bronte is trying to get to our minds. The idea that in real life, real love doesn't control its always expectations that play a role when it comes to making important decisions. ...read more.

still understand the reasons behind her choice and we have a bit of sympathy for her but mainly we sympathize with Heathcliff who is being mistreated by the one and only Catherine that he loved. However the unbreakable love between Catherine and Heathcliff is realistic even though it is immoral in the eyes of the readers it is still realistic and unlike any other love its strong deep and unnatural. What makes it realistic is that it is affected by events occurring. For example even though Heathcliff was counting the days he spent with Catherine and the days Catherine spent with linton. That doesn't just show love it shows passion and worship however catherines response was "very foolish". This changed Catherine again adds the main theme of the novel which is confusion and it makes us as readers wonder why is she behaving that way even though we know some information or a part from the answer we still want to know the real reason which makes the reader more interested and that's what bronte wants and cleverly achieves. By adding realism to the romance she makes this novel a romantic yet realistic master piece. ...read more.