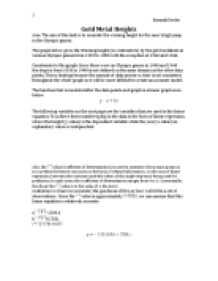 Aim: The aim of this task is to consider the winning height for the men’s high jump in the Olympic games.

The graph below gives the Winning height (in centimeters) by the gold medalists at various Olympic games form 1932 to 1980 with the exception of 1940 and 1944.

Constraints to this graph: Since there were no Olympic games in 1940 and 1944 the slope is from 1936 to 1948 is not defined on the same domain as the other data points. This is limiting because the amount of data points vs. time is not consistent throughout the whole graph so it will be more difficult to create an accurate model.

The function that is modeled after the data points and graph is a linear graph seen below:

The following variables on the next page are the variables that are used in the linear equation. To achieve these numbers plug in the data in the form of linear regression, where the height (y-value) is the dependent variable while the year (x-value) an explanatory value or independent.

was extremely close to 1 in value, therefore the goodness of fit is as good as it could be for a model.

This is the model that occurred after trying to find the best fit. This equation had the closest value to r² out of all the order possibilities.

The lower r2 value for the linear regression indicates that the polynomial regression is a better fit to the data.

Here is the graph that shows that the polynomial better is a better fid for the data then the linear model.

Estimating the winning heights of 1940 and 1944 would be done in the following way:

Look at the Polynomial Model since it has a better goodness of fit.

Here is the data in a table to compare graphs

The trend from 1896 to 2008 is relatively stable slope until 1952 where the slope increases in a (if it was a double derivative) concave down manner until 1996, where it levels off.

Modifications to the data would be to interpolate the data, which is the process one uses to determine a value on the line of best fit within the cluster of scatter plot data.