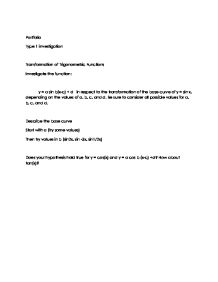 Describe the base curve

Start with a (try some values)

The purpose of this study is to examine the transformation of trigonometric functions of y=A sin B (x-C) + D and determine the effect on the base curve y=sin(x). I am going to be systematically changing the values of A, B, C and D in the equation y= A sin B (x-C) +D. First I am going to examine different numbers for the value of A. I am going to use whole numbers, negative whole numbers, positive rational numbers and negative rational numbers for the value of A and see how this affects the Sine curve. Then I will examine different numbers for B, then C then D.

Changing the value of constant B

I am now going to change the values of B in the equation y= sin(Bx) to see what affect it has on the base curve.

Figure 11 shows that the amplitude, maximum and minimum values have the same value as the curve y=sinx, i.e  1 and -1. The period of y=sin3(x) has decreased from 2 π to π/3. It is also noticed that increasing the value of ‘B’ to 3, the curve repeats itself three times within the period f 2 π. So this shows that large values for ‘B’ have a smaller period but a larger frequency. So this shows that ‘B’ affects the period which affects the frequency of the equation.

Figure 12 shows that the amplitude and maximum value remain 1 while the minimum value remains -1. And that the period also decreased from 2 π to π /3. Once again using the trace option on the graphing calculator, we notice that using a negative value inverts the curve.

Figure 26 shows my prediction is correct.

After examining what happens when changing all values in the equation, y= A sin B (x-C) +D, I am now going to predict what changes will occur is I used the equation y= 5 sin -2 (x-1) + ¾. I predict that the maximum value will change to 5, the minimum value will change to -5 and the amplitude will change to 5. The base curve is inverted because the ‘B’ value is a negative value and the period of the curve is decreased to π which increases the frequency to 2. The base curve also shifts to right by 1 unit and shifts vertically upwards by 0.75 (changing the maximum value to 5.75 and the minimum value to -4.25).