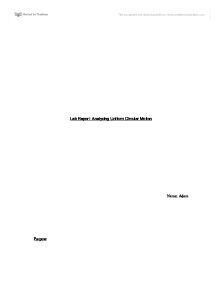 In places where the velocity of an object is difficult to find, it is reliable to attain the frequency of an object. This is the most-favourable method used when dealing with circular motion. Frequency, as we know, is indirectly proportional to the period of a motion, or more precisely

. We can determine the relationship between a spinning objects mass, the radius of its circular motion (if attached to a thread) and the hanging mass in a circular horizontal motion by applying a formula we already know. The following steps will describe the derivation of a formula which will be beneficial for this experiment;

However; acceleration of a circular motion is given by;

where; mh= the mass of the hanging object

ms= the mass of the spinning object

r = the length of the radius of the horizontal motion.

To measure the relationship between frequency and Isolate for the three independent variables; we must isolate for each variable. Isolating for the three manipulating variables in the y = mx + b form we get:

These are the manipulated equations which will be utilised throughout the lab report.

(Note: The formula expressed has previously been derived such that F is equivalent to the Weight of the hanging mass. Thus, it is beneficial to create a graph between Mh rather than F itself which compiles of Mh times the accepted value of acceleration due to gravity, only indirectly describing the relation between Mh and f.)

(Note: The uncertainty on each of the Period is an estimated guess. An electronic stopwatch was used which has a precision of uptil 0.01 s. Assuming that the reaction time was perfect, we get a manufacturer’s uncertainty of 0.01 s. However, the idea of reaction time will be explained later on in the Section of Evaluation).

The Manipulated Data section (not to be confused with previous manipulating radius and mass etc) will include all the data calculated with respect to the data collected from the actual experiment. Here it will be convenient to use the converted raw data for legitimate results. A data table for frequency and frequency2 will be shown with respect to the independent variables.

Data table # 5: Frequency2 for (1/r) [with respect to the formula attained]

This process was followed to attain the correct uncertainty and the actual value for each of the values represented in the data above. For the following tables, which require the reciprocal of the original independent value, the same method was use (for e.g. 1/ms) and the same method was applied to figure out the f2 value.

This equation was derived from the previous equation provided, and helps us determine the relationship between Ms and frequency in a linear manner. A further graphical explanation will be provided in the Graphical Analysis part.

Some non-major sources of error could be those such as air resistance. Although, not much air was there, but the air molecules do interfere with the radius going down at an angle, and more human force being required for the system compared to the force originally caused by the Hanging mass.

These errors lead to a systematic error, and the y-intercepts in each manipulated equation reflects that. The experiment could be made better in a sense that, more trials are taken for each different sub-experiment. The person revolving can also make sure that they put enough force behind it to overcome the force of resistance. Also a constant speed would be required for more accurate results. The manipulated graphs could have also had a line of best fit, which touched 0 in order to get a more accurate slope, since there were no y intercepts in the original equation. But if the data was accurate, then the line would have automatically touched 0.

All in all, the percent error can be high due to the fact that we deal with quite small numbers. This experiment does consist of some systematic errors which can be improved on.

Finding the mass of a rubber stopper

The original spinning mass of the stopper is 0.013 kg.

This means that the error is really low, and that this value is valid.