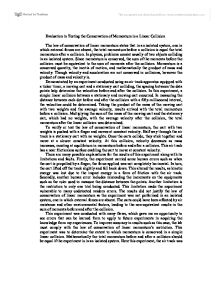 Evaluation in Testing the Conservation of Momentum in a Linear Collision

Evaluation in Testing the Conservation of Momentum in a Linear Collision The law of conservation of linear momentum states that in an isolated system, one in which external forces are absent, the total momentum before a collision is equal the total momentum after a collision. In physics, problems consist usually of two objects colliding in an isolated system. Since momentum is conserved, the sum of the momenta before the collision must be equivalent to the sum of momenta after the collision. Momentum is a conserved quantity, the inertia of motion, and mathematically the product of mass and velocity. Though velocity and acceleration are not conserved in collisions, however the product of mass and velocity is. Demonstrated by an experiment conducted using an air track apparatus equipped with a ticker timer, a moving cart and a stationary cart colliding, the spacing between the data points help determine the velocities before and after the collision. ...read more.

Half way through the air track is a stationary cart with no weights. Once the carts collide, they stick together and move at a slower constant velocity. At this collision, velocity decreases as mass increases, meeting at equilibrium in momentum before and after a collision. This air track has a near frictionless surface enabling the cart to move at constant velocity. There are many possible explanations for the results of this experiment along with its limitations and faults. Firstly, the experiment carried some human errors such as when the cart is propelled by a finger; the force applied was not completely horizontal. In turn, the cart lifted off the track slightly and fell back down. This altered the results, as kinetic energy was lost due to the impact energy in a form of friction with the air track. ...read more.

To improve accuracy in results such as this case, the lab must comply with the law of conservation of linear momentum's restriction. This experiment was to determine the extent to which momentum is conserved in a simple linear collision. Mathematically the total momentum before and after a collision should be equal if the experiment is in an isolated system. Here this experiment, the air track was open to many environmental factors that altered the results. In future experiments, to verify or justify the hypothesis, the lab must comply with the law's conditions. Another improvement is to apply only a horizontal force so the cart will not experience much friction with the air track. Also, conducting more experiment should eliminate the majority of the random errors in accumulating an average from the results. In all, this experiment did exemplify that even in an open system, most of the momentum is conserved in this simple linear collision. ...read more.