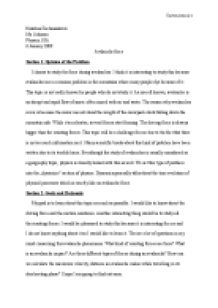 Section 1. Opinion of the Problem

I choose to study the force during avalanches. I think it is interesting to study this because avalanches are a common problem in the mountains where many people dye because of it. This topic is not really known by people who do not study it. As you all known, avalanche is an abrupt and rapid flow of snow, often mixed with air and water. The reason why avalanches occur is because the snow can not stand the weight of the snowpack starts falling down the mountain side. While it accelerates, several forces start forming. The driving force is always bigger than the resisting forces. This topic will be a challenge for me due to the fact that there is not so much information on it. Many scientific books about this kind of problem have been written due to its terrible harm. Eventhough the study of avalanches is usually considered as a geography topic, physics is closelly linked with this as well. We set this type of problem into the „dynamics“ section of physics.

R1: Sliding friction between the avalanche and the underlying snow or ground.

R2: Internal dynamic shear resistance due to collisions and momentum exchange between particles and blocks of snow.

R4: Shear between the avalanche and the surrounding air.

R5: Fluid-dynamic drag at the front of the avalanche.

To find out acceleration on an avalanche, we have to know these resisting forces. The formula for this is listed in the documentation. The importance of the individual resisting forces varies within the avalanche and depends on the type of avalanching snow.

Lastly, I will teach you somethings about avalanche impact. Avalanches can produce very large dynamic forces on objects. High velocity, low density, dry snow avalanches may flow over or around objects. This produces a fluid-dynamic stagnation pressure which is calculated by P = 1/2 pV2. Here P is pressure, p is the avalanche density and V is avalanche velocity.

The driving force(F) and the resisting forces(R) act on a moving avalanche to determine its acceleration and maximum velocity. 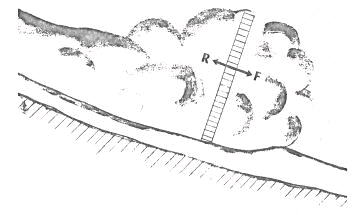 Parts of an avalanche path 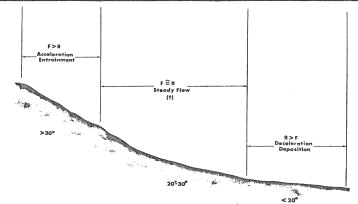 Formula for counting the acceleration of an avalanche 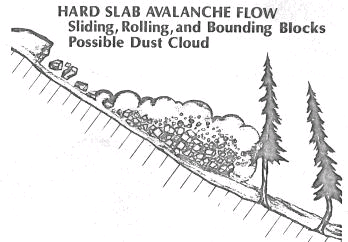 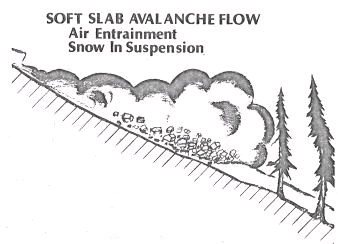 Impact of a dry snow or powder avalanche may produce
both drag and lift forces on an object. 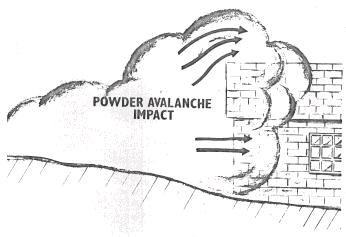 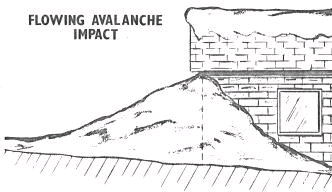