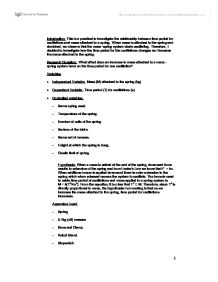 This is a practical to investigate the relationship between time period for oscillations and mass attached to a spring. When mass is attached to the spring and stretched, we observe that the mass-spring system starts oscillating.

Research Question:  What effect does an increase in mass attached to a mass-spring system have on the time period for one oscillation?

Hypothesis: When a mass is added at the end of the spring, downward force results in extension of the spring and from Hooke’s Law we know that F  = kx. When additional mass is applied downward there is extra extension in the spring which when released causes the system to oscillate. The formula used to relate time period of oscillations and mass applied in a spring system is    M = k(T2/4π2). From the equation, it is clear that T2 ∝ M. Therefore, since T2

In order to keep the controlled variables constant, I used the same spring to take all readings. The retort stand was kept in the same position and the spring was suspended at the same height throughout. The experiment was carried out in the same room to minimize the effects of air resistance.

The equipment used to calculate the time was a stopwatch which is not very accurate and hence the method used to carry out the experiment was also not up to full accuracy.

Although the results were fairly accurate, there are various causes which lead to inaccuracies. In order to eliminate the uncertainties in time I should use the electronic device called data logger which gives us more accurate results since there is no human reaction time. I can also try to oscillating the system slowly so that it does not swing in other directions and oscillates vertically. Also, I should measure the masses independently so that there are no uncertainties in masses.

I could have also repeated the experiment five times to get more accurate results and increased the range of the masses.