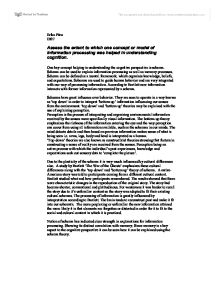 Assess the extent to which one concept or model of information processing was helped in understanding cognition.

Erika P�rn IB07 Assess the extent to which one concept or model of information processing was helped in understanding cognition. One key concept helping in understanding the cognitive perspective is schema. Schema can be used to explain information processing as well as memory processes. Schema can be defined as a mental framework, which organizes knowledge, beliefs, and expectations. Schemas are used to guide human behavior and are very integrated with our way of processing information. According to Bartlett new information interacts with former information represented by a schema. Schemas have great influence over behavior. They are seen to operate in a way known as 'top down' in order to interpret 'bottom up' information influencing our senses from the environment. 'top down' and 'bottom up' theories may be explained with the use of explaining perception. Perception is the process of interpreting and organizing environmental information received by the senses more specifically visual information. The bottom-up theory emphasizes the richness of the information entering the eye and the way perception can occur from using all information available, such as the schemas in our minds. ...read more.

Showing its distinct correlation with memory. Since memory is a key aspect to the cognitive perspective it can be seen how it can be explained using the schema theory. a) Explain one psychological or social question from the cognitive perspective b) Compare the cognitive explanation of the question with the explanation offered by one other perspective you have studied for this paper. a) One psychological question, which may be explained using the cognitive approach is aggression. The cognitive approach is concerned with how people acquire, store, transform, and use information. Cognitive psychologists rejected behaviorist assumption that mental events or states were unsuitable for scientific research. The main assumption of this perspective is that mental processes can be investigated scientifically. Other assumptions include: belief that cognitive processes actively organize and manipulate information received, that humans do not merely respond passively to the environment. This may be seen as soft determinism. Cognitive approach sees aggression cannot be understood without considering mental processes. ...read more.

To a certain extent both approaches are deterministic and are thus tied when explaining aggression. Both perspectives see social behavior like aggression as something that has been learned. Both approaches see the human mind as 'tabula rasa' or blank slate since the behavior depends on what has been learned. According to the behavioristic approach when main assumptions of the approach are applied to aggression, instrumental aggression is introduced. According to the behaviorist aggression may be understood through instrumental aggression. Instrumental aggression is aggressive behavior that has been maintained due to received positive reinforcement. Another contributor to aggressive behavior is frustration aggression hypothesis. Frustration aggression hypothesis is a theory developed by Dollard and Miller asserting that frustration is the sole reason for aggression. In this case frustration is defined as something, which is blocking a goal orientated response. This will then arouse a drive that motivates aggressive behavior. Frustration has a intuitive appeal. Thus limiting the notion of free will with this approach. The cognitive perspective does not see the humans as passive responders to environmental stimuli. ...read more.