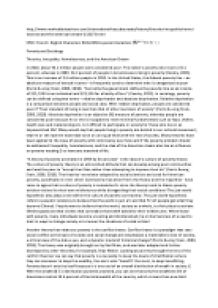 ï»¿http://www.markedbyteachers.com/international-baccalaureate/history/theories-inequality-homelessness-and-the-american-dream-213173.html SPEC: French: English Characters INCLUDING special characters (%^* “€ £ $ ‘+) Poverty and Sociology Theories, Inequality, Homelessness, and the American Dream In 2010, about 46.2 million people were considered poor. The nation’s poverty rate rose to 15.1 percent, whereas in 2009, 14.3 percent of people in America were living in poverty (Censky, 2011). That is an increase of 2.6 million people in 2010. In the United States, the federal poverty line – an absolute measure of annual income – is frequently used to determine who is categorized as poor (Ferris & ump; Stein, 2008, 2010). “Currently the government defines the poverty line as an income of $11,139 for an individual and $22,314 for a family of four” (Censky, 2011). In sociology, poverty can be defined using two terms – relative deprivation and absolute deprivation. Relative deprivation is a comparison between people and social class. With relative deprivation, people are considered poor if “their standard of living is less than that of other members of society” (Ferris & ump; Stein, 2008, 2010). Absolute deprivation is an objective (%) measure of poverty, whereby people are considered poor because he or she is incapable to meet minimal fundamentals such as food, shelter, health care and material objects. Is it difficult to participate in society for those who live in an impoverished life? ...read more.

(Ferris &ump; Stein, 2008, 2010). The theory was originally brought on by Karl Marx, and was later adapted and further developed by other theorists; for example, Max Weber. Looking at poverty through the lens of the conflict theories’ we can say that poverty is a necessity to keep the levels of stratification where they are moreover to keep the wealthy, the one’s who “benefit” the most, to keep benefitting. Poverty doesn't exist by itself because it is one end of an overall distribution of wealth in society. £ With the wealth (£ $ ) distribution pyramid provided, you can see that only the wealthiest 1% of Americans control 35.6 percent of the total wealth of the country, which is more than one-third (Roos, 2011). “The system the United States has for distributing wealth is capitalist” because it is organized so a small portion of the population controls most of the capital used to produce wealth. “This ultimately leads a small portion of the wealth” that is divided amongst the rest of the population. The middle class and lower class make up the base of pyramid, and with a majority of the people competing over what’s left to them by the 1%, it’s inevitable that many people are going to wind up on the short end and living in poverty (Johnson). ...read more.