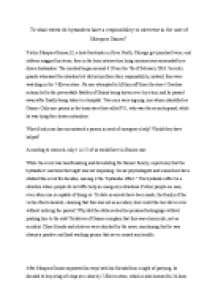 To what extent do bystanders have a responsibility in the case of Marques Gaines?

Transfer-Encoding: chunked ﻿To what extent do bystanders have a responsibility to intervene in the case of Marques Gaines? Victim Marques Gaines,32, a hotel bartender in River North, Chicago got punched twice, and robbers mugged his items, then in the busy intersection lying unconscious surrounded by a dozen bystanders. The incident began around 4:20 am the 7th of February 2016. Security guards witnessed the situation but did not perform their responsibility, instead, they were watching in the 7-Eleven store. No one attempted to lift him off from the street. Careless actions led to the preventable fatality of Gaines being driven over by a taxi, and he passed away after finally being taken to a hospital. Two men were arguing; one whom identified as Gaines. Only one person in the busy street has called 911, who was the security guard, while he was lying face down motionless. What if only one has encountered a person in need of emergency help? Would they have helped? According to research, only 1 in 55 of us would have in Gaines case. While the event was heartbreaking and devastating for Gaines' family, experts say that the bystanders' reactions that night was not surprising. ...read more.

It is common that in most situations, bystanders would assume that someone else will take the responsibility since they believe someone more qualified will assist. People cannot handle the stress and will not interfere with the legal cases. They adapt to others because they do not want to feel embarrassed or pressured (Audience inhibition). We would instead feel guilty and still think that we are good people. Few people would think that it is none of their business, that they have a busy life and therefore do not want to create problems for themselves and waste time. Since it was in the early hours during a weekend surrounded by bars, people that did not witness the fight assumed that the person is intoxicated and moved on. People tend not to act out or speak up in crowds because they are unsure of what to think about the current situation. Most of the time, people do not want to involve themselves because they fear that their safety may be at stake. Pluralistic ignorance is as well an important factor that correlates to this case, the more amount of bystanders reject the situation, others will then assume that it is okay to accept it as a norm. ...read more.

Due to that, the victim was lying down unconscious, if there were a shorter distance between them or if the victim made eye contact that bystander would get the message that he is in need of their help. This sign of body language will make the person directly more responsible and thus more likely to help. If the victim was a particular gender or appearance, it could change the bystander's mind. If it were a woman, there would be more help. Unfortunately, people tend to judge the victim based on their looks. Most bystanders are all experiencing feelings of confusion and hesitance, but still, bystanders have an obligation and responsibility to intervene when someone is in trouble. Taking moral responsibility is essential. Although, if a person is with a group of witnesses following an emergency situation, they should attempt to communicate with each other and figure out how each can best contribute to the situation. Discussing personal skills or resources that may prevent the case to get worse. To at least prevent the cars from accidentally running over the person, it takes a few minutes to stop cars and then call the police. It takes one person to step up and be a leader, taking that action will change the world of those in need. Word Count: 1221 words ...read more.