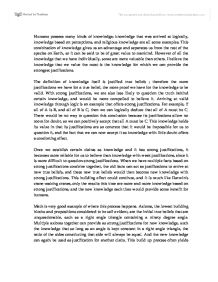 The knowledge that we value the most is the knowledge for which we can provide the strongest justifications. To what extent would you agree with this claim?

This has caused problems in the past, and a very famous case involved the famous Galileo Galilei. Galileo had strong empirical justifications that the solar system was heliocentric, or Sun centered, while the widely accepted knowledge at that time was that the solar system was geocentric, or earth centered. The geocentric idea spawned from verses in the Psalm that stated "the world is firmly established, it cannot be moved."(Psalm 93:1) and "the sun rises and the sun sets, and hurries back to where it rises."(Ecclesiastes 1:5) Galileo argued that the Scriptures were speaking figuratively and not literally, which was the way it was interpreted by the Church. Despite his pleading, his work was not allowed to be published and he was placed in exile. However as we know today through modern proof, Galileo had in fact been right about the heliocentric solar system. Another reason that Scriptures are weak justifications is due to their questionable source. They were written by other individuals long ago based on their own perceptions and thoughts, so they cannot be argued as strong justifications, the fact that scriptures differ dramatically between religions solidifies this fact. Religious knowledge can be said to be based on weak justifications. But does that make it not valuable? Most of the world would strongly argue against that. ...read more.

Only upon seeing her taking care of the other children again do I remember all the fun times my class has had in the past. These memories were subdued because of my strong belief that she was a wicked woman, and other imprecise memories may even have formed as a result of this. Studies have actually been conducted by psychologists such as Bartlett and Loftus that showed memory reconstruction to contain inaccuracies. This shows that our own memories can in fact be based on weak justifications as well, even though we may trust it and feel that they are comprised of strong justifications. Contrasting the weak justifications of memory with the stronger justifications in math such as 2+2=4 makes the latter seem more reliable as knowledge. Yet again the case presents itself of whether that necessarily makes math more valuable because it holds stronger justifications. The subjectivity behind what is "valuable" becomes evident again and individuals can have unique ways of defining what is valuable to them. A person's memory can be seen as more central to them as a human being, despite the fact that it may be partly inaccurate. Personally I hold knowledge with the strongest justifications as being the most valuable, because then I can be sure of its validity and depend upon it without worries. This kind of reliable knowledge is also what gave humanity its power to produce all the technologies of today, which are quite valuable to us. ...read more.