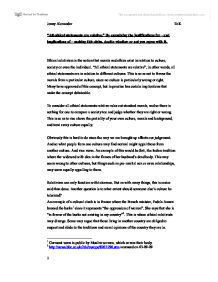 All ethical statements are relative. By examining the justifications for - and implications of making this claim, decide whether or not you agree with it.

"All ethical statements are relative." By examining the justifications for - and implications of - making this claim, decide whether or not you agree with it. Ethical relativism is the notion that morals and ethics exist in relation to culture, society or even the individual. "All ethical statements are relative", in other words, all ethical statements are in relation to different cultures. This is so as not to favour the morals from a particular culture, since no culture is particularly wrong or right. Many have approved of this concept, but in practise has certain implications that make the concept debateable. To consider all ethical statements relative rules out standard morals, and so there is nothing for one to compare a society too and judge whether they are right or wrong. This is so as to rise above the partiality of your own culture, morals and background, and treat every culture equally. Obviously this is hard to do since the way we are brought up affects our judgement. ...read more.

Others may disagree saying that as long as no one is getting hurt or offended, people should be able to follow their own beliefs no matter where they are. People will think that their own view makes more sense, but may not realise that that the other person probably has their own justifications for their view. However societies are changing and morals are reforming with time. As people are travelling, communicating and interacting more cultures are intermingling and so morals and ethics are evolving and in effect becoming more similar. The role of media has been the most effective to show these differences. International written, visual media, and the Internet are becoming easily accessible and people are becoming more aware of their right to information. This enables individuals to compare the morals in each culture, and decide independently whether their own culture is right or wrong. An example of this is women in afghan are realising their unequal treatment after becoming more aware of the world around them, and as a result are working to reform their countries beliefs And this is what ethical relativism fails to observe. ...read more.

This causes problems on board an airline, since there are times where communication to the cockpit is crucial, but their culture prohibits it. This is an example of a situation where culture clashes with the modern world. So it's not only natural, but it's in some cases crucial for morals to evolve, in order to keep up with the modern world. This causes morals to become more and more similar. As this is happening, ethical relativism will start to become a more obsolete opinion. Therefore I disagree with the claim in question more than I agree with it. To a certain degree ethical statements should be relative, in cases where human rights aren't violated, and everything remains consensual. This would allow the desired equality each culture deserves. As well as maintain intercultural harmony. Ethical relativism assumes each cultures right. This would prevent moral development. And so the implications occur when a certain practises violate the fundamental morals of most societies. 1 Garment worn in public by Muslim women, which covers their body. 2 http://news.bbc.co.uk/2/hi/europe/8203290.stm accessed on 03-09-09 Jenny Alexander ToK 1 ...read more.