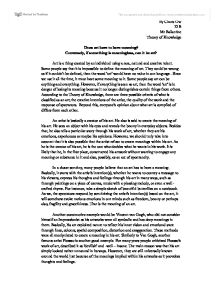 Does art have to have meaning? Conversely, if something is meaningless, can it be art?

By Charis Ow 12 B Mr Ballantine Theory of Knowledge Does art have to have meaning? Conversely, if something is meaningless, can it be art? Art is a thing created by an individual using a rare, natural and creative talent. Some people say that it is impossible to define the meaning of art. They could be wrong as if it couldn't be defined, then the word 'art' would have no value in our language. Since we use it all the time, it must have some meaning to it. Some people say art can be anything and everything. However, if everything is seen as art, then the word 'art' is in danger of losing its meaning because it no longer distinguishes certain things from others. According to the Theory of Knowledge, there are three possible criteria of what is classified as an art; the creative intentions of the artist, the quality of the work and the response of spectators. Beyond this, everyone's opinion about what art is compiled of differs from each other. ...read more.

Similarly to Van Gogh, another famous artist Picasso is another good example. For many years people criticized Picasso's work of art, described it as 'devilish' and -well - insane. The main reason was that his art simply looked rather unnatural in its ways. However, they are still universally known around the world just because of the meanings implied within his artworks as it provokes thoughts and feelings. On the contrary, what if a piece of work of an artist does not have a meaning within it? Is it still considered as an art? What if the artist refuses to provoke emotions, feelings and thoughts of the audience? Does it still make his piece of work an art? What if the artist wants his work to be meaningless? What if he has no message to convey to his viewers? Maybe that piece of work is constructed with the intention to spend the spare time that he has? As we view from a different perspective, it can also be considered that as long as artists have a creative intention and the urge to produce a piece of art, their work is definitely ...read more.

In this matter, from one point of view, art has to have meaning in much the same way as words written on paper have meaning considering how an artist intends to convey a message and to communicate emotions without words. On the other hand, art also does not have to be about anything to be good. In fact, the more people tried to scrutinize and understand the meaning of the artwork, the less interesting that work becomes as they are easily deciphered by the audience. It is also said that "the greatest art takes a lifetime to understand; the slightest takes a moment". While more people tried to make their own meaning from a piece of art, it does not mean that it is the initial meaning that the artist intended. Sometimes, many tried hard to figure out the meaning of an art but it turns out that the artist's intention does not want his art to have any meaning at all. I believe it is open to interpretation whether does something have to have a meaning or if it does not, is it still considered as an art? (1,108 words) ...read more.