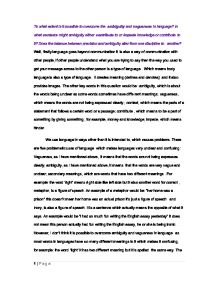 To what extent is it possible to overcome the ambiguity and vagueness in language? In what contexts might ambiguity either contribute to or impede knowledge or contribute to it? Does the balance between precision and ambiguity alter from one discipline to

To what extent is it possible to overcome the ambiguity and vagueness in language? In what contexts might ambiguity either contribute to or impede knowledge or contribute to it? Does the balance between precision and ambiguity alter from one discipline to another? Well, firstly language goes beyond communication it is also a way of communication with other people, if other people understand what you are trying to say then the way you used to get your message across to the other person is a type of language. Which means body language is also a type of language. It creates meaning (defines and denotes) and it also provides images. The other key words in this question would be: ambiguity, which is about the words being unclear as some words sometimes have different meanings; vagueness, which means the words are not being expressed clearly; context, which means the parts of a statement that follows a certain word or a passage; contribute, which means to be a part of something by giving something, for example, money and knowledge; impede, which means hinder. ...read more.

lamp 'switch on the light' all these words with multiple meanings makes language unclear since its very important to know the meaning of a word as words provide understanding. We cannot overcome it as it is basically impossible to get rid of ambiguity because every person has a different way of expressing their feelings and experiences through different areas of knowledge. For example, if you try to describe what a computer looks like to a blind person if they have never seen one before they would probably have a completely different image of a computer in their mind which probably looks completely different to what it actually looks like. This is because people use words differently and everyone has a different way of describing things which can be quite unclear. However, ambiguity and vagueness is possible to overcome if the common sense view is used. As if someone says "switch on the light" it is quite obvious that they are talking about a light or a lamp but, it can be misunderstood once in a while. ...read more.

As conclusion, I think that it is not possible to overcome the ambiguity and vagueness in language as people won't be able to just stop using all those words with double meaning and being ironic. If it is possible to overcome ambiguity and vagueness then we all will be speaking our mind and being straight forward which cannot be done by all of us and I believe that ambiguity impedes knowledge as it makes language unclear which will confuse people and lastly, I also believe that the balance between precision and ambiguity does change from one discipline to another as sometime people do say things which means exactly as it sounds as it doesn't have any other double meaning to it and sometimes it doesn't as it does have other double meaning to it. However, language does have its own flaws but on the other hand, language is very powerful and it has no limits, as Ludwig Wittgenstein once said "the limits of my language are the limits of my world" Word count: 1004 words ?? ?? ?? ?? 1 | Page ...read more.