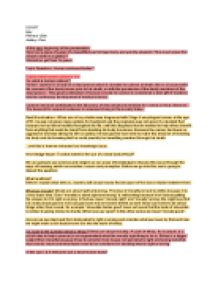 TOK speech - Knowledge Issue: To what extent is the use of a dead body ethical?

﻿SCRIPT Key: Penney- Blue Ashley- Pink At the very beginning of the presentation Hand out a piece of paper of a beautified part of dead body and ask the students ?How much does this artwork worth in a gallery?? Interactive, get them to guess Topic Question: Human cadavers/bodies? Explain what human cadavers are. So, what is human cadaver? Human cadaver is a body of a dead person which is donated to science at death; this is of course with the consent of the dead person prior to his death, or with the permission of the family members of the dead person. This great contribution of human remains to science is considered a best gift of mankind into the continuous development of medical science. Cadaver research contributes to the discovery of new advanced medicine for various serious diseases. The demand for research cadavers is remained strong in the society today. Real life situation: When one of my relative was diagnosed with Stage 4 esophageal cancer at the age of 51, he was not given many options for treatment and the prognosis was not good. He decided that because he had been healthy throughout his life, until this diagnosis that he wanted to help others benefit from anything that could be learnt from donating his body to science. ...read more.

The denomination revokes the membership of anyone who participates in a transfusion even if to save a life. On the topic of Science: How do we know it?s ethical? In general, five or more medical students share a single cadaver, which they study over the course of several weeks in the first year of medical school. Unfortunately, the shortage of donated bodies prevents the level of in-depth study that would be possible if fewer students could be assigned to each cadaver. The use for donated bodies is medical research. Through whole body donation, researchers have gained insight into early diagnosis of diseases such as cancer. They have also invented new surgical techniques, perfected existing ones, and learned about the pathophysiology of conditions like Alzheimer's disease. Medical students who dissected a body in the course of their study typically attend a memorial service held in honor of the men and women who donated their bodies. For Science through Emotion: Yes- The person that dies knows that they are leaving the world in a better place because they?re contributing to science and technology. And the person will probably feel as if they will serve one last purpose from the remains of his or her own dead body, which will realistically decay. ...read more.

There is a line between education and entertainment. However, our perspective is different from others. For example, from a doctor?s point of view, no matter their personal viewpoints are, ethical/unethical, they still need to carry it out for the purpose of this noble job. Limitations: Personal Bias Nonetheless, there are some personal bias. Personally, I get sick a lot, so science research has really helped me throughout my childhood visitations to the hospital. It has saved my life many times so I believe that the use of cadavers are ethical, to develop and advance medical research. However, I was not brought up with any religion, hence the religious aspect of the argument is not valued highly in my regard. While Ashley? I used to go to an all girls catholic school, and my family is also Catholic. Although I am a woman of science, I do keep religion at the back of my mind. I will only participate in a scientific experiment if it is ethically right. Factual/Procedural Limitations Since the body cannot be presented in multiple ways, language can be used, to a limited extent to analyse this issue. Hence, we did not choose to investigate the language aspect of this matter. So, is it ethical to use a human cadaver? This is still an issue. ...read more.