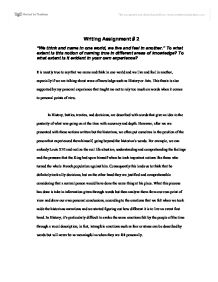 Writing Assignment # 2 "We think and name in one world, we live and feel in another." To what extent is this notion of naming true in different areas of knowledge? To what extent is it evident in your own experience? It is mostly true to say that we name and think in one world and we live and feel in another, especially if we are talking about areas of knowledge such as History or Arts. This thesis is also supported by my personal experience that taught me not to rely too much on words when it comes to personal points of view. In History, battles, treaties, and decisions, are described with words that give an idea to the posterity of what was going on at the time with accuracy and depth. However, after we are presented with these notions written but the historians, we often put ourselves in the position of the person that experienced them himself, going beyond the historian's words. ...read more.

intangible emotions such as fear or stress can be described by words but will never be as meaningful as when they are felt personally. Arts are another good example; in fact, there is not such a way of knowing that differentiates the two worlds as much as Arts do. In Arts, people learn a precise vocabulary, invented specifically to describe a work of art in its tiniest particulars, most of the times non even known by persons that haven't studied arts before. Sculptors, for instance, learn this unequivocal vocabulary that allows them to describe the work that precisely that the speaker can evoke a precise image, true to reality, in the audience's mind without showing the sculpture. Even though this new language has given the artists a way to communicate and describe a work in detail, it is definitely not the same thing to hear a comment on it, despite all the preciseness and flawlessness that the description could have, rather than to see the subject in front of you, as tangible and real as it could be. ...read more.

When he went there, the same astonishing car described on the website looked utterly ugly to my dad so he sadly had to come back home, after a purposeless trip. This experience made me fully understand how a description with words can seem amazing but you never fully know what is being described until you see it with your own eyes. A combination of colors may be perfect on paper, but when you see it as a whole, materialized, you might change your mind. There is no way to describe something without impairing its meaning, because emotions are difficult, if not impossible, to be fully described through words. This is all the more true if we consider personal points of view, in fact two persons might be seeing the same thing but feeling different emotions. Many people have tried to come up with a language that would truly transmit emotions, but the reality is that sensations can't be evoked through the use of words, but rather by the actual presence of the subject being analyzed. ...read more.