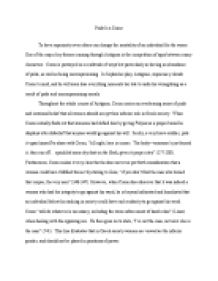 Throughout the whole course of Antigone, Creon carries an overbearing sense of pride and irrational belief that all women should accept their inferior role

﻿Pride Is a Crime To have superiority over others can change the mentality of an individual for the worse. One of the major key themes running through Antigone is the competition of egos between many characters. Creon is portrayed in a multitude of ways but particularly as having an abundance of pride, as well as being uncompromising. In Sophocles play, Antigone, supremacy clouds Creon?s mind, and he will soon lose everything moments too late to undo his wrongdoing as a result of pride and uncompromising morals. Throughout the whole course of Antigone, Creon carries an overbearing sense of pride and irrational belief that all women should accept their inferior role in Greek society. When Creon initially finds out that someone had defied him by giving Polynices a proper burial he displays utter disbelief that anyone would go against his will. Sentry, a very brave soldier, puts it upon himself to share with Creon, ?All right, here is comes. The body?someone?s just buried it, then run off? sprinkled some dry dust on the flesh, given it proper rites? (277-280). ...read more.

In the opening scene, Antigone makes it very clear that she acknowledges the consequence of death by violating Creon?s edict stating to her sister, Ismene, ?And even if I die in the act, that death will be a glory? (86). This is a very strong statement held with pride that comes across very similar to Creon?s ego, which demonstrates both power and masculinity, two terms that were unheard of and never to be used to describe a woman. Antigone holds morals of being a ?lone individual, refusing to away or be swayed by any in the community? (Lines). Also, like Creon, Antigone portrays uncompromising morals in her belief that her brother, Polynices, deserves a proper burial by stating, ?I?ll lie with the one I love and loved by him? (87). Towards the end of the play, Antigone still holds strongly to her beliefs and original motivation with the inability to deny her wrongdoing by stating to Creon, ?I did it. I don?t deny a thing? (493). The depiction of Antigone as strong and unafraid of a man even in the moment of death is an extreme contrast against Creon?s patriarchal belief of the inferiority of women. ...read more.

Overall, Antigone?s pride and strength far surpassed Creon?s due to his cowardly demise which in turn proved she had successfully challenged the belief that women remain inferior to their male subjects in Greek society. Throughout Antigone, Sophocles established a very strong foundation between a patriarchal view of women in Greek society, and a ruler who clearly defies it which stemmed a conflict between two very similar characters, Creon and Antigone. The defiance Antigone establishes with Creon takes the negativity out of a woman?s role in society and creates a positive one that demonstrated that simply defying a superior power can sometimes be sufficient enough to defeat it altogether. Unfortunately, Antigone is a very strong play based on stubbornness between two forces that ends in taking the lives of three family members. However, Creon in turn learned a very valuable lesson from Tiresias, ?All men make mistakes, it is only human. But once the wrong is done, a man can turn his back on folly, misfortune too, is he tries to make amends, however low he?s fallen, and stops his bullnecked ways. Stubbornness brands you for stupidity?pride is a crime? (1132-1137). ...read more.