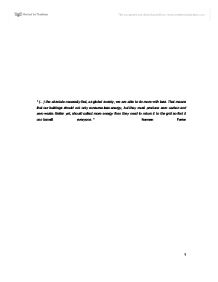 " (...) the absolute necessity that, as global society, we are able to do more with less. That means that our buildings should not only consume less energy, but they must produce zero carbon and zero waste. Better yet, should collect more energy than they need to return it to the grid so that it can benefit everyone. " Norman Foster Introduction The passive use of the goods provided by nature has always been present in the behavior of both humans and animals, from the most basic attitudes, as food gathering or seeking protection from predators or from weather in caves, even the most sophisticated forms of exploitation of local materials for construction, or natural forms of energy such as wind for sailing, water courses for mills, etc. Of these, construction activities resulted, thanks to the experience handed down from generation to generation, which, based on the popular architecture, will become passive architecture and evolved bioclimatic. Usually it is called passive conditioning systems to those that are a constituent part of the building, whether design factors or basic building elements (walls, windows, roofing, etc..) or modified (greenhouses, galleries, basements, etc. .) In this way the building becomes, naturally, in the collection system, control, regulation, accumulation and distribution of energy needed by its occupants to live. Bioclimatic Architecture. Definition Bioclimatic architecture is an architecture adapted to the environment, an architecture that takes into account the visual impact and disruption it causes to nature, an architecture concerned about the pollution it generates, either solid (solid waste), liquid (water dirty) ...read more.

The direct recruitment problem is the absolute dependence of the daylight hours, which together with the uncontrolled accumulation process, which will occur on floors and walls, causing an uneven distribution of heat throughout the day. To solve these problems posed by the simple collection, new systems have been developed. These improvements focus primarily on the proper accumulation of energy that has passed through the glass, and adequate spatial and temporal distribution of that energy. Passive solar systems that act on these parameters are called greenhouse attached and Trombe wall. Both systems are very similar, making a much like energy function. Of these, the greenhouse provides the basic idea, to catch the energy from solar radiation to heat air mass, while the Trombe wall provides essentially the distribution of that heat up less space. The greenhouse attached as passive heating system behaves the same way that the Trombe wall. While openings in the wall separating the adjacent room remain the same, it can be a weak element which does not have accumulation functions, such as the largest area of floor is enough to transform solar energy into heat. This allows referred to as greenhouse attached to a double glazed gallery, a conventional terrace court or a distribution atrium. Summer conditions. Passive cooling and ventilation Design thinking in the summer conditions is much more difficult than for winter conditions, as there are no natural sources of cooling as an alternative to the sun. Overheating is a phenomenon that takes place throughout the year as a result of the transformation of radiant energy from solar thermal energy. ...read more.

2. Madrid campus justice: police court http://www.urbanity.es/2008/campus-justicia-madrid-juzgado-de-guardia-enguita-lasso-de-la-vega-azpilicueta/ The front surround is solved by a double skin, which is responsible for protecting the building. An inner skin of glass is the closing of each elliptical floor. A second skin, determined with glass fiber mesh white, wrap the whole. The outer casing can be transparent or opaque, let the air or not, depending on the finishes and coatings available. Each element of the facade was designed by its solar impact parameter, thereby opening or closing the web of fiberglass mesh can be reduced by up to 70% the incidence of sunlight on the facade. This will significantly reduce building energy consumption and increasing the level of environmental comfort, thus contributing to the overall sustainability of Justice Campus. 3. Eco-cybernetic city http://deurrutia.blogspot.com/2010/01/eco-cibernetic-city.html The City eco-cybernetic takes input from the nature, its forms and strategies of integration with the environment. Its self-sufficiency is not only limited in the energy aspect, by the integration of aerogenerators that take advantage of the airflows between the two towers, and to the obtaining water of the air, but also in the economic, social and environmental aspects by its flexibility and integration of uses in the 150 floors, that turn it into a "alive machine". This building integrate the communication networks, incorporating in its facade a system of photovoltaic lattices , that give energy to screens of led's, creating a facade multimedia that interacts with the changes of the atmosphere. Also the skin of the building is made by bio-climatic panels who apply nanotechnology for their cleaning, these panels allows to the growth of vegetation in their surface creating a green mantle that purifies the air that crosses this skin. ?? ?? ?? ?? 1 ...read more.