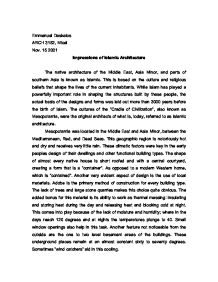 Emmanuel Daskalos ARCH 3152, Mical Nov. 15 2001 Impressions of Islamic Architecture The native architecture of the Middle East, Asia Minor, and parts of southern Asia is known as Islamic. This is based on the culture and religious beliefs that shape the lives of the current inhabitants. While Islam has played a powerfully important role in shaping the structures built by these people, the actual basis of the designs and forms was laid out more than 3000 years before the birth of Islam. The cultures of the "Cradle of Civilization", also known as Mesopotamia, were the original architects of what is, today, referred to as Islamic architecture. Mesopotamia was located in the Middle East and Asia Minor, between the Mediterranean, Red, and Dead Seas. ...read more.

This comes into play because of the lack of moisture and humidity; where in the days reach 120 degrees and at nights the temperatures plunge to 40. Small window openings also help in this task. Another feature not noticeable from the outside are the one to two level basement areas of the buildings. These underground places remain at an almost constant sixty to seventy degrees. Sometimes "wind catchers" aid in this cooling. These towering forms aren't in every structure, but their purpose is to extend thirty to forty feet above the ground and collect wind in all directions from their octagonal vent shape and tunnel this moving air downwards in dark cooling corridors to the sub-surface levels of living. ...read more.

The mosque, on the other hand, is relatively contemporary compared to the age of the citadel. The traditional form of a mosque is a circular dome surmounting an octagonal base with minarets, usually, positioned at the four corners. Although this form is most common, there are other variations. The exterior shape of the mosques is based primarily on regular geometry. Placing simple geometric shapes in regular and repeating complex patterns creates details for the structure. While this method is used on the exterior, the interior details are what receive the most attention. The ceilings, walls, and floors are literally covered with these tapestries of geometry. The aesthetics of Islamic architecture are quite breath taking in their mastery of geometry for simplistic form and complex detail, but the most important lessen to be learned is that of sensitivity to climate and local resources. ...read more.