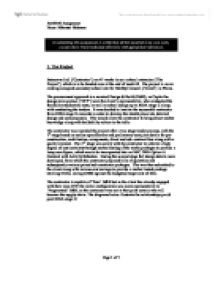 Case Study procuring construction. Interserve Ltd. (Contractor) are 41 weeks in on a school extension (The Project), which is to be handed over at the end of week 60. The project is on an existing occupied secondary school site for Merthyr Co

In submitting this assignment, I certify that all this material is my own work, except where I have indicated otherwise with appropriate references. 1. The Project Interserve Ltd. ('Contractor') are 41 weeks in on a school extension ('The Project'), which is to be handed over at the end of week 60. The project is on an existing occupied secondary school site for Merthyr Council ('Client') in Wales. The procurement approach is a novated Design & Build (D&B), as Capita the design team partner ('DTP') were the client's representative, who conducted the feasibility studies/site tests, as well as school design up to RIBA stage C along with conducting the tenders. It was decided to involve the successful contractor from RIBA stage D onwards in order to develop the sketch plans into detailed design and cost proposals. This would allow the contractor to bring direct market knowledge along with buildability advice to the table The contractor was awarded the project after a two-stage tender process, with the 1st stage based on outline specification and preliminary cost plan details for pre-construction, mobilisation, components, direct and sub-contract fees along with a quality element. The 2nd stage was solely with the contractor to achieve a high degree of cost certainty through market testing of the works packages to provide a lump sum figure, which was to be incorporated into an NEC 2005 Option A Contract with Activity Schedule. ...read more.

This relationship building has been recognised as a necessity by many contractors and thus most capable firms have BD units to maintain this aspect of the business. As Preece et al. (1996) stated that 'word of mouth' recommendations are as effective as any other type of marketing promotion. This point is imperative in such a short lived industry with numerous entrants and leavers and hence client confidence is swayed by market gossip...image/reputation is key! On this occasion the BD team indentified the opportunity and engaged with the client, resulting in a commitment to use the framework. Prior to this the client was already engaged with the DTP and was in the process to procure traditionally, but time was a critical factor and this partly influenced the client to use the framework. Bidding & Marketing Once the BD team had concluded their part the client was ready to develop the design further, by conducting a 1st stage evaluation to maintain internal compliance. This would allow the client to proceed with the successful contractor to the second stage. The second stage required marketing input to provide a stakeholder presentation day to discuss what added value and benefits would be available from each of the contractors along with their service capability and their understanding of the education sector. ...read more.

The site issues would have caused major disruption as the DTP working for the client would have been liable and this would have delayed matters as the contractor would have charged much more for time, site plant etc. if they had mobilised. Ultimately the successful contractor would have priced to win the job and this could in these times be a suicide bid in the hope to recover margin from charges and additional unplanned works. This would have ended up with the client, DTP and contractor locking horns and only focusing on their element of need. Conclusion Fortunately for the client the framework was proposed, which avoided the client from going down the full traditional route, which would have resulted in an unpredictable ending with charges, delays, liquidation and litigation. It supports the argument for the Latham Report (1994) where it is identified that the industry suffers from adversarial, incapable and fragmented delivery of projects whilst having no concern for mutual respect of each other's needs. If all contractors where to become more open and willing to co-operate/participate, such as the contractor in this study, we would see a change the industry's image with open and honest participation and stringer/longer strategic relationships being built for the benefit of all. However it requires all involved to participate whole heartedly and improve the experience in order for the industry to see a change. ...read more.