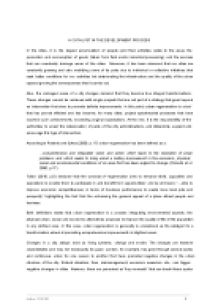 ﻿A CATALYST IN THE DEVELOPMENT PROCESS In the cities, it is the largest accumulation of people (and their activities relate to the area), the production and consumption of goods (taken from field and/or industrial processing), and the services that can eventually damage areas of the cities. Moreover, it has been observed that our cities are constantly growing and also modifying some of its parts due to individual or collective initiatives that seek better conditions for our activities but deteriorating the infrastructure and the quality of the urban spaces ignoring the consequences that it carries out. Also, the damaged areas of a city changes demand that they become true integral transformations. These changes cannot be achieved with single projects that are not part of a strategy that goes beyond an intervention that aims to promote definite improvements. In this point, urban regeneration is a tool that has proved efficient and has become, for many cities, project spearheaded processes that have reached such achievements, exceeding original expectations. At the end, it is the responsibility of the authorities to arrest the deterioration of parts of the city administrations, and citizenship, support and encourage this type of intervention. According to Roberts and Sykes (2000, p. 17) urban regeneration has been defined as a: ?comprehensive and integrated vision and action which leads to the resolution of urban problems and which seeks to bring about a lasting improvement in the economic, physical, social and environmental conditions of an area that has been subject to change. (Roberts et al 2000, p.17) Tallon (2010, p.5) declared that the concept of ?regeneration aims to enhance skills, capacities and aspirations to enable them to participate in and benefit from opportunities? and by all means ??aims to improve economic competitiveness in terms of business performance to create more local jobs and prosperity? highlighting the fact that the enhancing the general appeal of a place attract people and business. ...read more.

85). Even more, there are many advantages for the parties involved who can negotiate the profits of the development scheme but assuming the same levels of risk according to their participation. Although a developers struggle to keep all the profits from a development scheme, they might consider partnerships? associations in order to obtain a profit when this one is only the only way to obtain a return and it is usually associated to development schemes of a big scale. Another aspect that needs to be clarified is The Community Infrastructure Levy (CIL) which is a new planning charge that will allow raising funds that can be used for the infrastructure needed such new or safer road schemes, flood defences, schools, hospitals and other health and social care facilities, park improvements, green spaces and leisure centres (DCLG 2011, p.3). Understanding that the charge of the levy in any development in the first moment is planned, will allow comprehending that the money spent on infrastructure could enable more developments in the future which means that the communities and developers are in a relation where everybody wins. Probably, developers don?t see it in that way but it is a planning obligation under the Planning Act 2008 but it depends of the local authorities to choose between this mechanism and the Section 106 (S106). The main difference between these two planning obligations is that the S106 is scheduled to be used in the site were the development is planned whilst the CIL is planned to be used for general infrastructure contributions and could be used in a wider area, even outside the immediate impact area where the development is planned. There are many concerns about the figure of the CIL and how it will impact the regeneration schemes probably at risk of losing development schemes just because of the uncertainly risk that developers might confront in the future. ...read more.

The association will bring both parts imply benefits to the developer as much as the expected for the community. Also, the development of retail offices will bring the possibility to employ a wide range of socioeconomic working groups which bring a social inclusion strategy on the benefits to be gained for the community. This scheme will bring new job and new house opportunities for the locals and how it will be develop in conjunction with the borough, it will have to keep the local strategies that apply for the plan of developments in Southwark Borough. RMF Studio will have to ensure that the retail offer will be offered to a wider range socioeconomic group and it can be achieved by the association of small independent retailers in other to encourage the development of small local businesses. Also, with the development of offices and retail offices in the scheme the image of the development will be focus in a good quality design as it is part of a residential development scheme. A good strategy for the design of mixed development will be needed as part of this scheme, creating greener pathways between parts of development. It is also suggested to develop the offices and retail offices facing the streets in order to give a safe sensation to the visitors and the people that will be living there. Briefly, Think Tank Planners Ltd has been working as a consultancy company and the recommendations given in this report are part of studies and analysis of the development market and RMF Studio is free to take our suggestions as a part of its development. We can guarantee that a development supported by a local authority will bring you more benefits in the future whilst the site will do the same. Both parties gain working together and the risk taken by your company will be shared. Both scenarios given as samples of the development are financially profitable. ...read more.