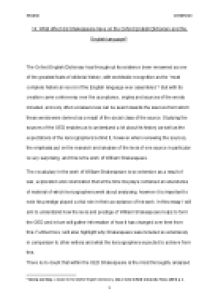 What effect did Shakespeare have on the Oxford English Dictionary and the English language?

﻿EN1040 119005820 14. What effect did Shakespeare have on the Oxford English Dictionary and the English language? The Oxford English Dictionary has throughout its existence been renowned as one of the greatest feats of editorial history, with worldwide recognition as the ?most complete historical record of the English language ever assembled.?[1] But with its creation came controversy over the acceptance, origins and sources of the words included, and very often a biased view can be seen towards the sources from which these words were derived as a result of the social class of the source. Studying the sources of the OED enables us to understand a lot about its history as well as the expectations of the lexicographers behind it, however when reviewing the sources, the emphasis put on the research and analyse of the lexis of one source in particular is very surprising, and this is the work of William Shakespeare. The vocabulary in the work of William Shakespeare is so extensive as a result of war, exploration and colonization that at the time his plays contained an abundance of material of which lexicographers went about analysing, however it is important to note his prestige played a vital role in their acceptance of his work. In this essay I will aim to understand how the lexis and prestige of William Shakespeare helps to form the OED and in turn will gather information of how it has changed over time from this. ...read more.

of cultural significance we can conclude that throughout the history of the OED there was an air of pretension and intellectual superiority. As we have noticed so far, the lexicographers themselves played a crucial part in the history of the OED simply due to the fact they created it. It was a reflection of them as people and a society, hence the need to seem tasteful was vital, when making the OED the extensiveness of Shakespeare?s work reiterates the lexicographers desire for ?taste and judgement? rather than simply literary fact. It seems as if they were almost using it to prove themselves as intelligent, ?they did not excerpt Philemon Holland with the same care they bestowed on Shakespeare. It would have shown a sad want of literary taste and lexicographical judgement if they had done so; but would have made the dictionary a better store of linguistic information.?[8] This aids us in becoming aware that the desire to seem resourceful and knowledgeable by lexicographers in some sense hindered the OED from being a superior source of information. Yet the vast use of Shakespeare?s work may help us to realise another fact about the lexicographers involved; although we know by now that the use of Shakespeare was an attempt to prove their intellect whilst also including a good source of information, they may have been further reasoning as it could also have been the result of the lexicographers agreement with him socially and literarily. ...read more.

Nevertheless although the creation of the OED does not appear to be a necessity, once created its updating as a result of etymology and the growth of the English language has been proven essential in its history. We can see that the movement of the OED to electronic form was not just convenient but essential. We have already noted that the ?collected works of Shakespeare totals approximately 33,300?[15] yet with the development of the electronic version we recognize that these ?first recorded uses may be susceptible to antedating?[16]. Therefore by paying close attention to the lexis of Shakespeare throughout the different editions of the OED we can gather that during its history the lexicographers were disposed to making mistakes, and following the work of Shakespeare helps to highlight the importance of constant updating. To conclude, the OED and its makers have since the day it was conceived set out to create a perfect reference of the English language, however it seems that some sources have been deemed more useful than others. On analysing the aspect of Shakespeare in the OED we gather a good sense of its history, with the extensive use of Shakespeare sometimes suggesting the pompous persona of lexicographers, and at others reinforcing the OED?s unnecessary nature. However although the history of the OED was ?long and occasionally very bumpy?[17], it is inarguable that its inclusion of Shakespeare?s work has helped and shaped its growth through history, building it up to what Brewer calls ?one of the great endeavours of Victorian and Edwardian scholarship. ...read more.