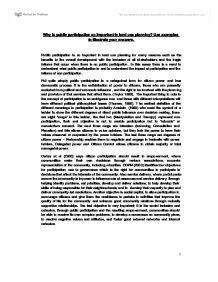 Why is public participation so important in land use planning?

An effective consultation process based on trust can be secured through allowing the process to be voluntary, making sure all the interested parties agree to be mediated, it is very important that the mediator has no special interest or stake in the process to avoid bias, making sure that all the interested parties agree to the final conclusion and they have a total understanding of the following procedures. The OPDM (2003) also emphasises the need in consultation of entering into a deliberative process of dialogue and listening, all while being sensitive to power imbalances and being inclusive. The benefits of active consultation are what could be the stabilisation of economic, social and physical decline in an area. Public participation and consultation may improve the social and economic prospects of the whole community, there may be greener and more effective management of the environment, the social infrastructure may be enhanced and the sustainability and stability of the existing community may be improved with better communication between local authority and a development with widespread acceptance by the public to be legitimate. (Thake 1995) Without public participation we see many expensive planning mistakes that could have been easily avoided, such as the erection of the numerous tower blocks that dominate Glasgow city, the problem ...read more.

Eventually the plan had to be scrapped as the Official IRA and UDA both made it clear to the authority they were prepared to take action should demolition and road be built, and construction companies were reluctant to commit equipment and personnel to these areas. (Weiner 1976). In 1982 the issue was raised again in the Housing Renewal Strategy with 42 smaller redevelopment areas and 15 housing action plans that rehabilitated 7500 dwellings, the regeneration of difficult to let housing estates. This time around public participation was valued more as Tenants Action Project and Community Places (CTA) were used to support resident in planning projects. In conclusion the reason public participation is so important is the fact that with an effective form of it, not only the community will benefit with improved social infrastructure and stability of the community but there will be a better relationship with the community and economic prospects for all sides could be better. What is seen with a failure to engage in public participation is the disruption of communities and possible negative social consequences that surround it, community distrust and perhaps outright hostility and an unsustainable economic and social landscape. ...read more.