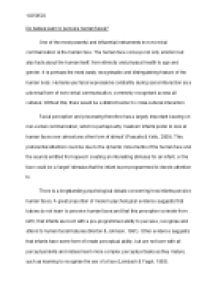 ﻿10259520 Do babies learn to perceive human faces? One of the most powerful and influential instruments in non-verbal communication is the human face. The human face conveys not only emotion but also facts about the human itself; from ethnicity and physical health to age and gender. It is perhaps the most easily recognisable and distinguishing feature of the human body. Humans use facial expressions constantly during social interaction as a universal form of non-verbal communication, commonly recognised across all cultures. Without this, there would be a distinct barrier to cross-cultural interaction. Facial perception and processing therefore has a largely important bearing on non-verbal communication, which is perhaps why ?newborn infants prefer to look at human faces over almost any other form of stimuli? (Pascalis & Kelly, 2009). This preferential attention could be due to the dynamic movements of the human face and the sounds emitted from speech creating an interesting stimulus for an infant, or the face could be a ?target? stimulus that the infant is pre-programmed to devote attention to. There is a longstanding psychological debate concerning how infants perceive human faces. A great proportion of modern psychological evidence suggests that babies do not learn to perceive human faces and that this perception is innate from birth; that infants are born with a pre-programmed ability to perceive, recognise and attend to human facial features (Morton & Johnson, 1991). ...read more.

A second experiment involved altering hair length and including unisex clothing so that the male and female faces appeared to be the same for those cues. Although categorical responses declined, there was still a significant amount of categorisation made by the older infants. It was found that by twelve months old, infants had clear categorisations for male and female faces, which may include hair length and clothing that was sex-typical. The findings from Leinbach and Fagot (1993) give evidence for an element of learning in their experiment, demonstrating the increase in sex-categorisation ability in infants as they mature. This particular area of face perception stands out from the other areas explored so far as it does not seem to be effective from birth, therefore may not be entirely innate or perhaps innate at all. Infant perception of attractiveness, however, appears to begin much earlier than sex-categorisation. An experiment by Slater et al. (1998) found that infants as young as 14-151 hours from birth devoted longer attention (looking) on attractive faces than unattractive faces when paired together. A later experiment by Slater, Quinn, Hayes, and Brown (2000) found that two-day-old infants still had a preference for attractive faces over unattractive, yet also had a preference for upright faces as opposed to inverted faces. This suggests that infants? early perception of faces as attractive is ?orientation-specific? (Slater, Quinn, Hayes & Brown, 2000), and that this upright-orientation perception of faces is either innate or rapidly learnt from birth. ...read more.