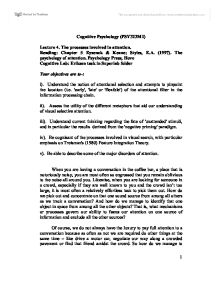 Cognitive Psychology (PSY323M1) Lecture 4. The processes involved in attention. Reading: Chapter 5 Eysenck & Keane; Styles, E.A. (1997). The psychology of attention. Psychology Press, Hove Cognitive Lab: Eriksen task in Superlab folder Your objectives are to-: i). Understand the notion of attentional selection and attempts to pinpoint the location (i.e. 'early', 'late' or 'flexible') of the attentional filter in the information processing chain. ii). Assess the utility of the different metaphors that aid our understanding of visual selective attention. iii). Understand current thinking regarding the fate of 'unattended' stimuli, and in particular the results derived from the 'negative priming' paradigm. iv). Be cognisant of the processes involved in visual search, with particular emphasis on Treisman's (1980) Feature Integration Theory. v). Be able to describe some of the major disorders of attention. When you are having a conversation in the coffee bar, a place that is notoriously noisy, you are most often so engrossed that you remain oblivious to the noise all around you. Likewise, when you are looking for someone in a crowd, especially if they are well known to you and the crowd isn't too large, it is most often a relatively effortless task to pick them out. How do we pick out and concentrate on that one sound source from among all others as we track a conversation? And how do we manage to identify that one object in space from among all the other objects? That is, what mechanisms or processes govern our ability to focus our attention on one source of information and exclude all the other sources? Of course, we do not always have the luxury to pay full attention to a conversation because as often as not we are required do other things at the same time - like drive a motor car, negotiate our way along a crowded pavement or find that friend amidst the crowd. ...read more.

In many ways the study of divided attention is aimed at mapping out the limits of the information processing system. For the most part work in this area has focussed on the performance of two tasks at the same time, or dual-task performance as it is known. Dual-task performance Practice on one or both of the tasks, the similarity of the two tasks and the level of difficulty of the tasks are the main features that are held to account for our ability to perform dual tasks. Spelke et al (1976), have shown that with sufficient practice it is possible to successfully read and write to dictation at the same time. Allport et al (1972) report similar findings with piano playing and shadowing and Shaffer (1975), with typing and shadowing. So it is possible with long periods of practice to achieve successful performance on a pair of highly demanding tasks. Where two tasks are very dissimilar, like driving and holding a conversation, task performance is often as good as the performance of either task on its own. However, the more similar the tasks the greater the difficulty. But what does 'similar' mean? Wickens (1984), distinguishes three types of task similarity - tasks that make demands on the same modality (e.g. both require visual processing); tasks that make demands on the same stages of processing (e.g. input, translation or output stages); tasks that require the same memory codes (e.g. visual or verbal). Task difficulty can be defined in many ways as you might expect. For example a reasonable person would agree that a task requiring the occasional memorisation of a list of three digits is easier than one were long lists of digits must be memorised. An important point, however, is that the difficulty experienced in the performance of a dual task is not simply the sum of the level of difficulty associated with each task independently. ...read more.

I heard her, agreed, and yet continued to put the cutlery away'. 1-3 All involve an intention to change from an old well-established routine. The old sequence intrudes. 4-5 Inattention contributes to exclusion rather than intrusion 6-7 Examples of branching errors in which attention is captured at the branch. 8-9 These are overshoots where the sequence is not stopped at the appropriate point. 10-11 A reversion to an earlier plan takes place. 12 Continuation of an earlier plan takes place. These errors are caused, not by lack of skill, but by misapplied competence. They are errors of the highly skilled, not of the learner, and tend to occur where sequences are similar and where one or other is frequently executed. Some problems * The claim that some errors are caused by internal and others by external factors is problematic. * Self-selection bias * Only those errors that are noticed are reported * Potentially important factors may be forgotten or overlooked in the period between occurrence of the error and its reporting. * Participation may change behaviour. * Behavioural v conceptual error classifications. * Mapping errors to cognitive mechanisms is problematic. The more errors, the more mechanisms or interactions between them are required to account for the behaviour. Any consequent theory is likely to be large and unweildy, and difficult or impossible to provide empirical verification/falsification. If there are too few error classifications any subsequent theory is assuredly incomplete. Nevertheless, behavioural capture is a powerful concept and is well-supported by data - 40% of errors being classified as capture by independent raters. The original notion behind the construction of the Cognitive Failures Questionnaire (CFQ) by Broadbent et al (1982) was that errors may occur because of aberrations in the working of perceptual, memory or action systems. Subsequent studies failed to find any support for this notion, all of the CFQ items loading on a single factor. Work on Reason and Mycielska's (1984) Error-proness Questionaire (EPQ) recovered only two factors - memory and attention. The processes underlying capture may, therefore, be fundamental cognitive processes that are in operation over many other behaviours too. 3 ...read more.