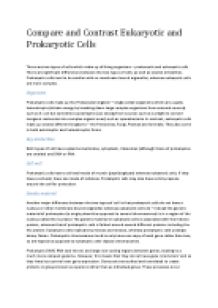 ﻿Compare and Contrast Eukaryotic and Prokaryotic Cells There are two types of cells which make up all living organisms ? prokaryotic and eukaryotic cells. There are significant differences between the two types of cells, as well as several similarities. Prokaryotic cells tend to be smaller with no membrane bound organelles, whereas eukaryotic cells are more complex. Organisms[a] Prokaryotic cells make up the Prokaryote kingdom ? single-celled organisms which are usually heterotrophs (obtain energy by breaking down large complex organisms from external sources) such as E. coli but sometimes autotrophs (use energy from sources such as sunlight to convert inorganic molecules into complex organic ones) such as cyanobacteria. In contrast, eukaryotic cells make up several different kingdoms ? the Protoctista, Fungi, Plantae and Animalia. They also come in both autotrophic and heterotrophic forms. Key similarities Both types of cell have a plasma membrane, cytoplasm, ribosomes (although those of prokaryotes are smaller) and DNA or RNA[b]. Cell wall Prokaryotic cells have a cell wall made of murein (peptidoglycan) whereas eukaryotic cells, if they have a cell wall, have one made of cellulose[c]. ...read more.

[g]Again, need to define these terms so the reader has some context [h]Should define transcription and translation [i]Strictly speaking, operon refers to the DNA containing the gene clusters, not the proteins the DNA encodes [j]But they do have analogs that serve a similar purpose! [k]Avoid sweeping statements like this- eukaryotes compensate by completing many metabolic reactions across the cristae of the mitochondria, for example, and in certain eukaryotic cells like human muscle cells the metabolic output easily rivals or is higher than the average prokaryote?s. [l]Too vague! I applaud your use of a figure, but it needs to be more incorporated into your essay- it shouldn?t be there for its own sake. [m]Overall, you seem to be very good at structuring and organizing your work, so well done! Unfortunately this essay has no conclusion, and neglects to mention that eukaryotes can form multicellular organisms- a huge difference between the two cell types. We will discuss in supervisions how to break down the ?need to include? information in your essay plan prior to writing to avoid this in the future. But as a whole, well done! ...read more.