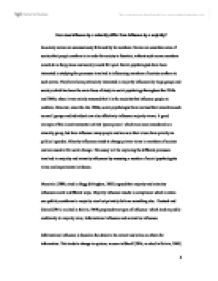 How does influence by a minority differ from influence by a majority? In society norms are unconsciously followed by its members. Norms are unwritten rules of society that people conform to in order for society to function, without such norms members would do as they please and society would fall apart. Social psychologists have been interested in studying the processes involved in influencing members of society conform to such norms. They have been particularly interested in majority influences by large groups and society which has been the main focus of study in social psychology throughout the 1950s and 1960s, when it was mainly assumed that it is the majority that influence people to conform. However, since the late 1960s, social psychologist have realised that minorities such as small groups and individuals can also effectively influence majority views. A good example of this is environmental activist 'green peace', which was once considered as a minority group, but have influence many people and are now their views have priority on political agendas. Minority influences tends to change private views in members of society and are essential for social change. ...read more.

study. Participants were presented with slides that were all different shades of blue and minority confederates of the experiment claimed that the slides were 'green'. There were three groups: (1) consistent minority group, (2) inconsistent minority group, (3) control group with no confederates. It was found that a consistent minority gained highest conformity and a control group had least conformity. Minority influence results in a long lasting and deep cognitive change in opinion. This is known as conversion or internalisation (Moscovici, 1950). This was demonstrated in a remarkable study by Moscovici and Personnaz (1980, as cited in Hogg & Vaughan, 2005). Participants were asked to identify the colours of the slides on a white screen publicly and then the after-image colour privately. It was found that minority influence didn't produce public conformity, but the private after-image colours seen by participants indicated cognitive changes influenced by minority, as they saw after-image colour of minority view. It was explained that this was due to participants concentrating more on minority views and giving less attention to majority views. However, a replication of Moscovici & Personnaz study by Dom & Van Avermaet (1979), found that participants influenced by majority and minority changed after-image. ...read more.

Minority influence differs from this as it produces conversion or internalisation which is a change in private opinion that is deep and long lasting, as shown in Moscovici and Personnaz (1980). Minority influence can be successfully achieved by adopting some main behavioural styles such as consistency (Moscovici, Lage & Naffrechoux, 1969), flexibility and certainty. Views that society holds about groups can affect the timing of conformity. Unlike minority groups, majority groups have the advantage of being able to influence from the start. But after some time to consider minority view, many move towards thinking more about that view and ultimately may start believing it themselves (Nemeth, Swedlund & Kanki, 1974). Minority and majority answers also affect ones ability to solve tasks effectively. Majority influence can lead to people thinking in more limited ways and less likely to solve tasks than when influenced by a minority group which encourages people to think more widely and use alternative methods (Nemeth, 1986). Interestingly, people are more likely to solve problems correctly of minority opinion is wrong. Finally, even thou there are so many ways in which a minority influence differs from a majority influence, it is worth considering alternatives such as the similarities between them and other factors that effect conformity to majority and minority influence such as those proposed by Slang (1976) on effectiveness of group size. ...read more.